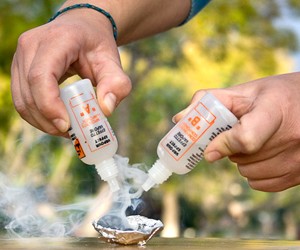 Smoke Drops will add authenticity to the snapshots of your housemate's festering underwear you plan to text to the girl who's too good for him. They will enrich the photos of our mom's piping hot, homemade chicken pot pie we always give to the homeless instead of money. And when creating that ingenious "It's a Boy!" announcement, Baby Preston won't actually have to smoke a lit cigar.

When a few drops from Smoke Drops Bottle A mingle with a few drops from Bottle B, poof! Literally. Smoke spontaneously materializes and wafts through the air for 5 to 10 minutes, giving amateur photographers, stylists, and Native Americans plenty of time to create and perfect visual effects typically restricted to professionals. Resultant smoke quantity is directly proportionate to the quantity of liquids added--more elixir means more billowing fog. Each bottle contains 25ml of liquid.

Smoke Drops, obviously, are made of reactive chemicals that could send you to the ER. Don't ingest them, don't mix them in the palm of your hand, and don't--ooh, this is interesting--put them on tin foil. Glass is their ideal receptacle, but many other mediums will safely avert a biohazard as well. Check out the tutorial for full usage directions, as well as a bunch of cool ways to harness the power of smoke.