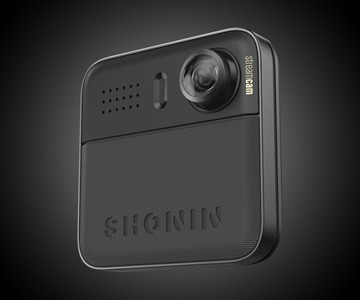 Who wants their very own cloud-connected bodycam? The Shonin Streamcam is a forthcoming wearable personal security camera that records goings-on in hi-res video and, via WiFi or cellular SIM, saves it directly to the cloud.

Shonin intends the Streamcam and its video evidence to give wearers some peace of mind should they witness, or be in the middle of, a crime, injustice, or accident. Cameras will come with your choice of cellular or WiFi tethering so any footage captured streams right up to the cloud. If you don't have service at the time, the Shonin Streamcam also records encrypted video to an expandable internal SD card. Again, to give you some peace of mind.

Orrrrr...cook up even more anxiety and suspicion and tension in the world. Kinda sucks that personal security cameras could become the next EDC must-have. I still think the Russian dash cam phenomenon is strange. I'll hold off on voluntarily clipping a Smile! You're on camera! device to my lapel for now.

For those of you who feel differently, the Shonin Streamcam seeks crowdfunding here on Kickstarter through September 13, 2017.

Using the camera seems pretty simple. Attach it to your top half with a slip-on clip for jackets and button-ups, or a magnetic clip for T-shirts. Click the big record button, and you're all set. The Shonin Streamcam begins collecting your adventures in wide-angle 720p video, and with an AudioMic for audio capture. Here's a GIF.

The WiFi-only Shonin model uses a hotspot on your phone to stream data to the cloud. The cellular model sends footage straight to the cloud by adding a SIM card with a data plan. Packages also include an 8GB micro SD card that encrypts and saves footage directly on the device.

The Shonin Streamcam is IP67 waterproof. It measures 56mm x 56mm x 13mm and comes in a variety of color combinations.

Who's in the market for an XXXXXL condom...for your entire upper body? The ShieldPod is a "wearable protective barrier" from Under the Weather, who have appeared to pivot their line of sit-down wearable rain and bug shields...

What's your Oura? Welp, according to the personal health tracker Oura Ring, it's tired, inactive, and slow to recover. Oh boy, another gadget to tell you you're doing life all wrong!...