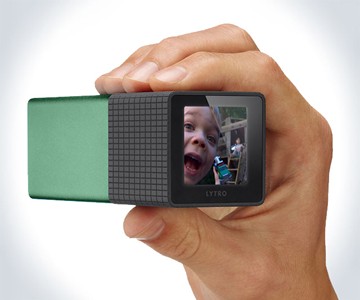 Shoot first, focus later. So goes the mantra to the Lytro Light Field Camera, the photography world's first "living pictures" point-and-shooter that allows users to tweak both the focus and the perspective of photos after they've taken them. In addition, the living photos don't die once they're downloaded and shared online--family and friends can continue the modification process to achieve their desired effects just like you do.

According to Lytro's manufacturer and God, the nifty oblong camera functions first by recording an image's entire light field--all the rays of light bouncing in all directions in front of the viewfinder--instead of normal flat, 2D images. This capability enables refocusing sleights of hand with simple taps of the camera's touchscreen on whatever part of the picture you want to bring into focus; once imported into your computer, mouse clicks will accomplish the same refocusing trickery. The Lytro Website includes several photos loaded and prepped for refocusing that you can dink around with to see the effects for yourself.

Lytro's second big gun, Perspecitive Shift (available beginning December 4, 2012), serves to move a photo in any direction to change the viewer's perspective of its supercalifragiawesomeness. It will work on previously captured light field photos, as well as new additions, and can be sampled along with the refocusing function on the Lytro Website.

Muchas danke to Manny, a loyal reader who does more work around here than we do, for the product suggestion.

If you can watch the Strike Cam video without vomiting it gets pretty alright around the 1m30s mark. An underwater camera pack created to capture a fish's take of the bait...and subsequent demise...the Strike Cam is waterproof...