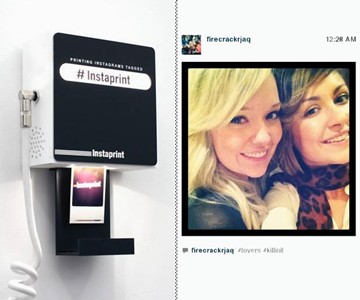 Instaprint is a location-based photo booth for printing hard copies of Instagrams. Combining the nostalgic spirit of Polaroids, with the 21st century technology of social media, Instaprint uses a microbial workforce and inkless paper to develop and pop out any Instagram photos snapped and labeled with the box's specified location or hashtag. For example, if you were to install an Instaprint at your Zombieland theme party, and designate the box with a #zombie hashtag, any guests taking photos and labeling them #zombie would have their shots queued up, and Instaprinted for posterity moments later. It's a photo booth that both fits in the palm of your hand, and doesn't require you and 4 of your broad-shouldered friends to wedge into a 1 x 2 space draped with an orange-barf-colored curtain to create scrapbook-ready memories of the perpetual high five that is your life!

Instaprint was invented in the spring of 2011 by a small company called BREAKFAST. They have been testing prototypes over the past year at events including store openings, product launches, the Grammy awards, and Lady Gaga concerts with great success. In fact, Instaprint is currently available for rental, but the transition from commercial to consumer product is one that requires more BREAKFAST staff, research, and dollars. The endeavor is undergoing a run on Kickstarter through April 29, 2012, with the goal of raising $500,000 in investment pledges. As of today, they are a little over a quarter of the way there. Investment levels range from $5 to $5,000, with a $399 commitment garnering an Instaprint home kit, with controller, coiled power cable, power supply, and 20 sheets of inkless paper.

2013 Update: Instaprint crowdfunding attempts were unsuccessful, but device rental is still available for $5,000 to $7,500 per day via the Instaprint Website below.

Some ladies have to get pregnant to pop out a baby, but those of you who love your boyfriends or husbands enough to wear their faces plastered across your bellies have only to buy one of these Custom Zip Face Swimsuits...

A complex, but increasingly important concept, computer vision (CV) is the collection of algorithms that devices ranging from security cameras to Facebook's PhotoTagger use to automatically detect and recognize human...

Guess who wants an Umbra Glo Frame to display lovey photos, adorbs snaps of my cat being adorbs, and wish-I-were-there trip pics for his birthday? Not this dude. Probably not you dudes either. By my wife, She-Ra: Princess...

The Cybertecture Mirror allows us to gaze simultaneously upon the two things we like gazing upon best: the Internet and ourselves. A glass reflection of both beatific mugs, and streaming Web content, the futuristic mirror...

Potato Parcel - Your Face on a Real Potato

Never thought you bore much of a resemblance to Mr. or Mrs. Potato Head, eh? Well. Just wait 'til you see your head on a potato. Potato Parcel is a potato printing press that customizes spuds with the photos and images...

Hmmm, ShutterBall looks like gadget fit for the MUA. But I guess that's not surprising given that people seem to enjoy taking selfies as much as they enjoy using sex toys these days. This bulbous piece of Bluetooth tech...