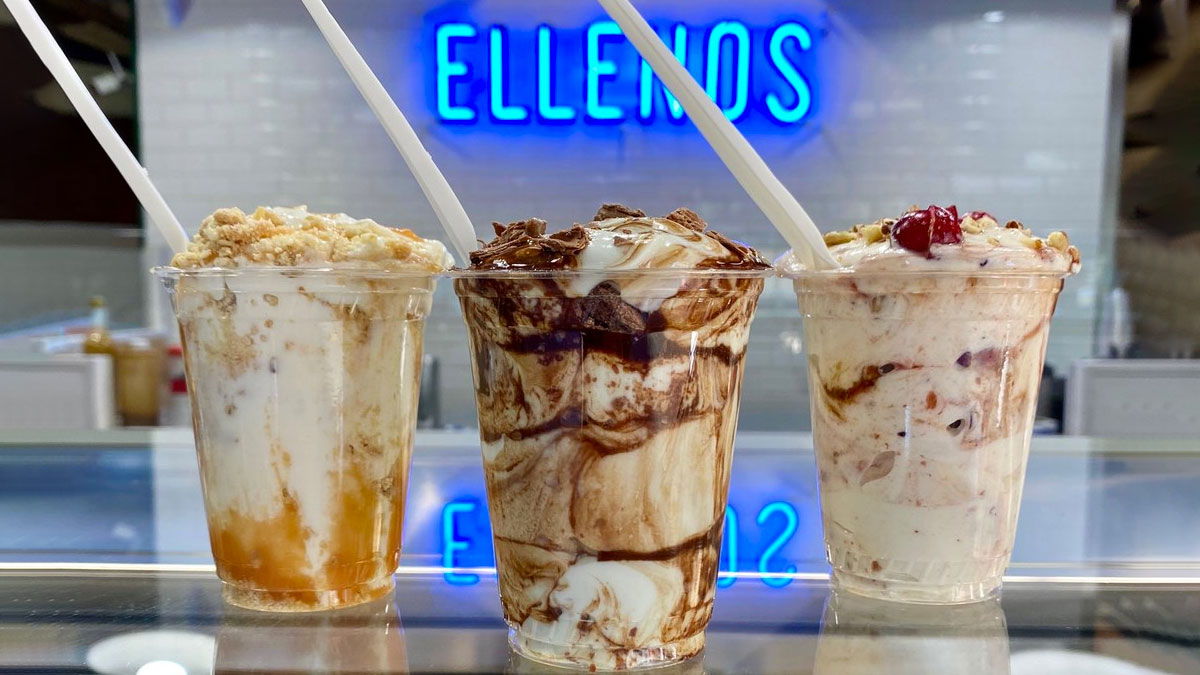 Somewhere between sour cream and Heaven lies Ellenos Real Greek Yogurt, the best yogurt - one of the best things, period - I ever ate. Actually, the Seattle small business deems its probiotic dairy perfection, "The Yogurt That Makes Ice Cream Jealous," and that may be an even better line for enticing yogurt no-goers and anyone who thinks, "Yogurt is yogurt, how could this be that much better?" to try it. Because believe dude me, if Ellenos ever gets into full national distribution, Ben & Jerry's better watch out.

Despite the "Greek" in its name, Ellenos began in Australia, where father and son team Con and Alex cooked and strained up the recipe to share. One of their customers was an American flight attendant named Yvonne, who - like many of you will, trust me - had a yogasm after one bite.

Ten years - and all the travel, logistics, and hard work condensed into the montage part of the movie - later, Con and Alex moved to Seattle to launch Ellenos Real Greek Yogurt with Yvonne and her husband, Bob.

Ellenos' first public appearance was in 2013, as a yogurt bar in Seattle's famous, and heavily trafficked, Pike Place Market. The yogurt cups they sold (and still sell) there combine Con and Alex's otherworldly yogurt recipe with Pacific Northwest farmers and flavors. The most representative is probably Marionberry Ellenos, a tub of thick and creamy Greek pummeled with a puree of the region's famous marionberry (it's basically a blackberry.)

According to Ellenos, what makes their yogurt so addictive is a "distinct, family blend of probiotic cultures we've nurtured over years and years of small-batch yogurt making at home." Even fans of commercial and small-batch Greek-style yogurts are unlikely to have tasted a bacteria-filled infusion with so much richness and freshness, and so little tang as Ellenos. I could eat their Plain Unsweetened flavor by the bucket.

Hand me the Mango or Passion Fruit, and I will bite off your hand if you don't retract it fast enough.

At printing, Ellenos was widely available in Seattle grocery stores, as well as several regional chains and small markets nationwide. You can also order curated selections of Ellenos Real Greek Yogurt in their online store (with free shipping!) albeit not the full flavor and product line yet.

Small Business Shoutout is a new series I'm trying out that spotlights products and services offered by local, little, and/or independent operations. Plenty of past Dude posts have featured small businesses - e.g., pretty much every Etsy shop out there - but Small Business Shoutout will largely aim to cover those with their own website, online marketplace, etc.

A key component of the Shoutout will be the availability of the small business' product or service to a large audience. For example, while previous Shoutout Alchemy 365 has fitness studios in Minneapolis and Denver, their Alchemy Anywhere streaming service is a workout from home option anyone in the world can subscribe to and take part in.

VHS tapes live! Or at least, you can give them new life - actual, thriving life - with one of these recycled VHS tape planters from Nifty Recyclables...

Uh-oh, did you drink your last microbrew or large format Belgian import? Now all that's left in the fridge is Rolling Rock and Michelob Ultra? It's cool, dude. When life makes you beer bitter, grab some beer bitters...

HIIT the yoga mat. A fitness streaming service with in-person studios in Minneapolis, MN and Denver, CO, Alchemy 365 classes combine intervals of strength building moves with bursts of cardio, and bookend them with a...

Meaningful Moments is a collective of independent artists using standout and offbeat ideas and techniques to create one of a kind pieces for indoor and outdoor display. For today's Small Business Shoutout, I'm highlighting...

Thief! Karamal Sutra thief! It's a refrain heard in kitchens the world over, and it's one the Ice Cream Keeper from One Man One Garage is here to stop for good...

Who wants some genetically modified Fla-Vor-Ice? You know, push popsicles raised in a freezer that treats its snacks with growth hormones. Yeah, OK, fine. They're just supersized because their fruit juice/yogurt/smoothie...

The Sweet Spot Instant Ice Cream Maker is basically the creamy dairy treat version of the slushie maker I used every weekend at my grandma's house as a kid. But here, to accommodate the flash-freezing of your cream and...