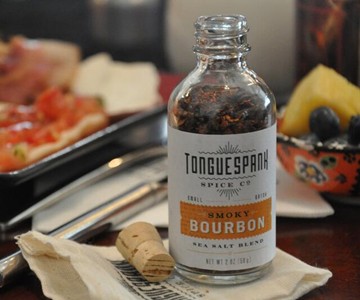 Under normal circumstances, my tongue wouldn't be the first place I'd pick to be spanked. But seeing as Tonguespank Spices are coating their lashings in flavors like Garlic Grappa and Scorpion Bourbon, I guess I'd be OK with opening my mouth and allowing them to lay down the paddle.

Chicago-based Tonguespank Spice Company believes liquor and hot peppers make everything better. Judging by their quadruple-funded Kickstarter campaign for the seasonings last fall, many people who consume food agree. The company has created 4 spice blends from flavors they feel have a natural compatibility, with each intended to jack up anything from grilled meats to eggs to pizza, and deliver a solid wallop to the tongues that receive them.

Smoky Bourbon. Morita chipotle peppers, garlic, and bourbon ease you into the attack so a ghost-and-habanero chili combo can crack the whip hard at the end. Tonguespank says if you try just one variety of their spices, Smoky Bourbon should be it.

Citrus Rum. Described as the trickiest of Tonguespank spices, Citrus Rum is based on habanero, rum, and allspice. Both ingoing and outgoing, it slaps best on any type of protein, plus cider and hot chocolate.

Garlic Grappa. Italian liquor made from the seeds and stems of grapes. I can attest that a shot of grappa will put hair on your chest. And vomit in your toilet when taken an ounce too far. I don't doubt its tongue spanking abilities either. Here it pairs with Tuscan herbs, balsamic vinegar, and an Italian brandy blend, plus the staple habanero pepper. Recommended on pasta with marinara sauce.

Scorpion Bourbon. The hottest of the tongue-spanking hotness. The Alessandra Ambrosio of spices. It's Smoky Bourbon with the addition of Trinidad Moruga Scorpions, one of the hottest peppers in the world. Heat rating is up to 2 million Scoville units (Jalapenos=20,000).

Edible Crayons? Edible Crayons?! Everything my mama taught me as a kid - namely, what she taught me not to eat - is going out the window. Joining Edible Birthday Candles and Edible Printer Paper, we now have Food Crayons...

Time to grind me some Pokemon! What, no? That's not how the game works? Then what am I supposed to do with this Pokeball Grinder?...

I'm trying to think of a way to spin the Chemist's Spice Rack into something besides the perfect gift for a complete culinary geek, but...donut hole. Then again, as evidenced by the comments on ThinkGeek's listing of...