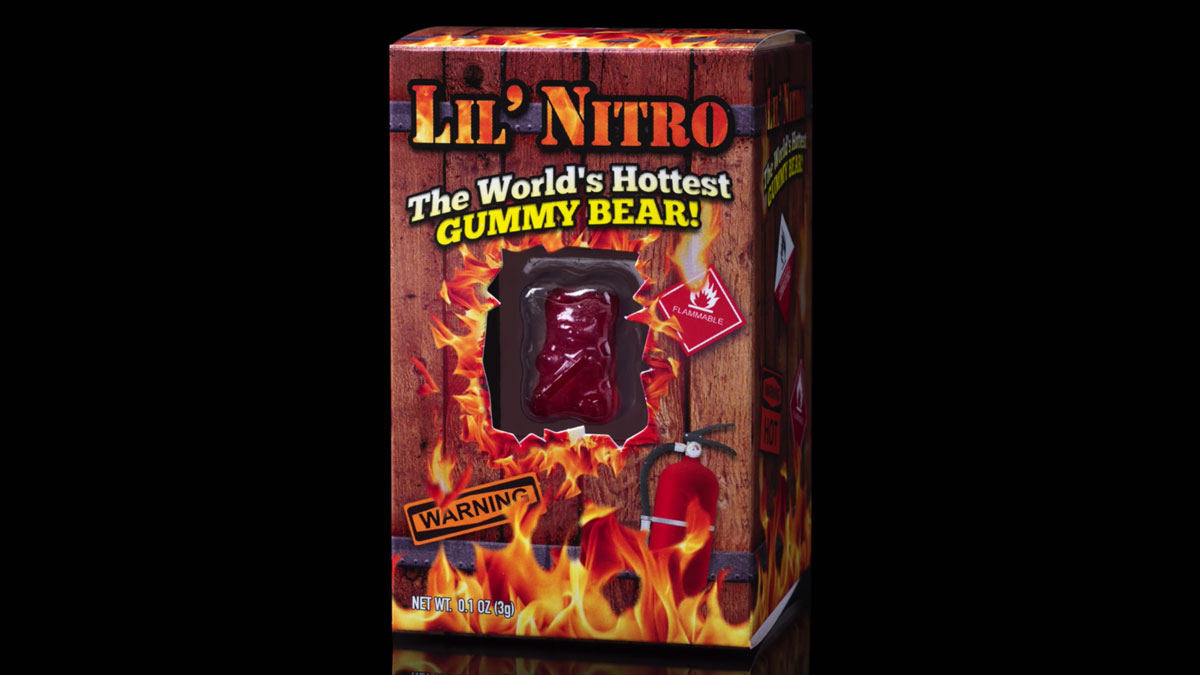 At 900 times hotter than a jalapeno, and at least that much hotter than Lil's Wayne, Jon, Kim, and Bow Wow, Flamethrower Candy Co. believes its Lil' Nitro is the World's Hottest Gummy Bear. And therefore ripe for a dare-you-to-eat-it spicy thing challenge, a la Paqui's Carolina Reaper Madness Chip and Fuego Box's Cocoa Loco chocolate.

The Lil' Nitro Gummy Bear has a 9,000,000 Scoville rating. Anyone who watches Hot Ones knows that's Hot dam! hot, but not necessarily indicative of how much flesh it will sear off the inside of your mouth (see Da Bomb vs. The Last Dab). Still if you check out the gummy's taste testers, it does appear that despite being a Lil', this Nitro doesn't F around. Also, it is not recommended for consumption by anyone under the age of 14, or who's a third cousin or greater of DJ Khaled.

Note: One upshot of the hottest gummy bear on earth is that Lil' Nitro is at least normal gummy bear-sized, unlike many other novelty gummy products, which weigh as much as a human toddler.

Do you like big, bold, whack-you-in-the-face flavors...in your toothpaste? Then grab a tube of Chilly and let this ghost pepper and twice-mentholated toothpaste take you from the blistering heat of Death Valley to the...

Ho(t), ho(t), ho(t)! The 25 Sauces of Christmas Hot Sauce Advent Calendar is both less and more daunting than appearing on Hot Ones, or putting together your own DIY Hot Sauce Challenge. Less because, as an advent calendar...

The Trufflin Sriracha & Ranch duo are a hot sauce and dressing infused with black truffle, and dubbed the "VIP Set." Because while Trufflin sauce itself may not be the boss - certainly not by Sweet Baby Ray's trademark...

The makers of Fire Syrup, a jalapeno-infused sweetener and flavor kicker upper, call their creation "A sweet, hot squirt of genius with 104 uses!"...