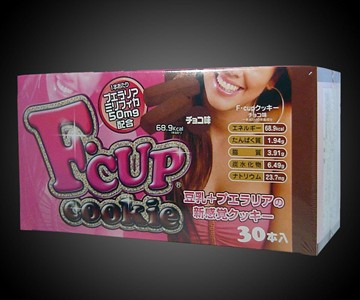 $20
from Japan Trend Shop »
Check It Out

F-Cup Cookies sound like they would be a joke, and they probably are, but for all women with concave chesticular regions and, more importantly, for all the men who have to fondle them, I sure as 2 seconds of motorboating Kelly Brook would be the best 2 seconds of my life hope they're not. At least they have a 50mg dose of a mythical-sounding herb in them called the Pueraria Mirifica plant. Which, according to Wikipedia, does have some witch doctor validity in breast enhancement pursuits:

Some cosmetic products and herbal supplements claim various health benefits of the extracts of Pueraria mirifica including increasing appetite, enlarging breasts, improving hair growth, and other rejuvenating effects; however, there is no scientific evidence to support any of these claims. The U.S. Federal Trade Commission has taken action against manufacturers who make such fraudulent claims.

Figures the US takes action against manufacturers who claim a miracle herb can naturally increase breast size from bee sting to boobielicious. Boy am I glad the Japanese are way less persnickety and uptight and way more inclined to endow their women with the kinds of racks men deserve.

Japan Trend Shop's package of 14 F-Cup Cookies are plain in flavor, yet hopefully mouthwatering in effect. Ladies, directions suggest eating 2 per day. Probably for, like, 3 years, at which point you'll definitely have a bigger chest. And ass, thighs, and gut to match it.