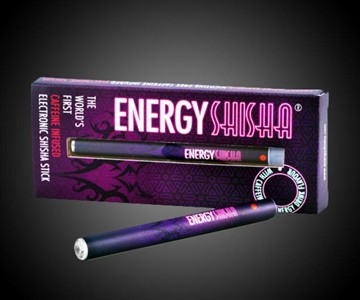 While drinking coffee in public isn't forbidden...yet...with the recent boom in vaporizer popularity, it's not surprising that caffeine has hopped inside the barrel too. Energy Shisha is an electronic vapor pen that outputs wafts of pure caffeine with each inhale. Smokeless and tinted with a "mild, sweet" flavor, Energy Shisha quickly delivers a portable, spill-free, and user-controlled boost anywhere you're feeling sluggish.

Each Energy Shisha vapor pen contains up to 300 puffs, or around 30 hours' worth of caffeine fixes. Recommended intake is 5, 3-second puffs for 20 to 30 minutes of energy, and labels recommend taking no more than those 5 inhales in succession. It is also ill-advised to take more than 20 puffs in any one hour. Oh, and Energy Shisha vapes are intended only for adults 18 and over. So if you get one and then notice your 6-year-old just took less than an hour to build the entire Ewok Village out of LEGOs, tp rolls, raw spaghetti, and some moldy tortillas you're pretty sure you threw in the trash...maybe give him a few more puffs and see how he fares edge trimming the lawn.

Energy Shisha ingredients include propylene glycol, glycerol, Energy Shisha flavoring, caffeine (0.3% per ml), and taurine. Vapor pens contain no nicotine or tobacco (or, presumably, other herbal delicacies); they also have no sugar or calories.

You may consider the Holmes Pipe, a vaporizer twist on Detective Sherlock Holmes' iconic tobacco pipe, a sacrilege. A perversion of purity akin to turning the Houston football stadium into a Death Star for Super Bowl...

Double the pleasure, double the fun, Double the Barrel with a vaporizer engineered to load and fire a duo of different oil cartridges at once. Just like the double barrel pistol, except, uh...not a gun...