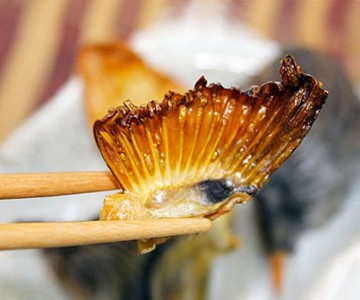 $88
from Japan Trend Shop »
Check It Out

Fugu is what they call blowfish or pufferfish in Japan. It's also the name they use for the dish licensed chefs make from the adorable Dizzy Gillespie of the sea. And that's licensed not just as chefs, but specifically as chefs certified to handle, cook, and serve fugu. Which brings us to what many Americans call the delicacy: that poison fish that can kill you if you eat it wrong.

Pufferfish are indeed poisonous, though the fun noxious juices are contained in their organs. Cut properly, it will largely stay there, leaving the skin, flesh and, as seen here, the fins of the fish free (and dangerously thrilling!) for the eating. I say "largely" because fugu chefs don't necessarily eliminate all traces of the toxin when preparing fugu, but reduce it to levels safe for consumption. Some say when eating the fish the remnants inject a mild high, including waves of euphoria and the tingles.

I doubt the grilled and dried Torafugu (tiger pufferfish) fins Japan Trend Shop is selling will get you high, but if you're an adventurous foodie you might be interested in trying them just to say you done it. They come in packages of 10, and it's recommended to rehydrate them in a cup of warm sake for 2 to 3 minutes as preparation.

You know those dreams you have when you're flying, spinning, disoriented, or drowning? They're all about to come true. At once. The SUBWING underwater glider attaches to a rope and boat at one end, and your death grip...