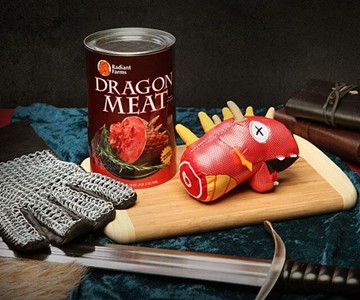 Canned Dragon Meat. It's like Canned Unicorn Meat, but from a slain dragon instead of a slain unicorn. It probably tastes a lot tougher, maybe a little charred, but since slaying a dragon is considered heroic and grounds for receipt of a beautiful princess and the keys to a kingdom, while slaying a unicorn is considered the most base of all evils, eating a dragon is probably less likely to get you harassed by PETA. Also, if you didn't eat the dragon, it would probably eat the unicorn.

Canned Dragon Meat arrives direct from the Sisters of Radiant Farms in Scotland. The basic can contains belly, brisket, butt, and pointy parts from newly butchered scaled beasts, though special orders of dragons that have been sword felled and preternaturally preserved in their tins for over a thousand years are available for those who demonstrate great merit and valor. And by that the Sisters mean negotiations start at 1,000 British Pounds.

Easy Kabob Maker - Perfect Tubes of Meat on a Stick

Oooh, Easy Kabob Maker, talk about chopping a log. Laying a brick. Parking some bark. Pinching off the perfect piece of meat on a stick. (The perfect tube steak, I'd like to say, but that would be mixing lewd metaphors.)...

The practicality of slaying a dragon in 100% leather armor is questionable at best, but one thing's for sure: all the fair maidens who haven't seen this much cowhide since Kiss performed at the dairy farm are gonna dig...

I love beef, and I love girls, but somehow the combination of the two doesn't work so well for me. The cuts of meat diagram on this dress carries implications of objectifying women and also cannibalism, and that is so...