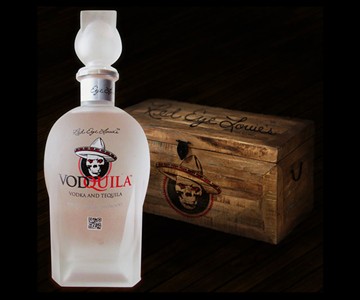 Vodquila. A mix of vodka, tequila, and a first class ticket to a hangover-free Sunday morning. I know they say two wrongs don't make a right and all that crapola, but I don't think that's true for alcohol. Like, I'm pretty sure mixing two liquors individually notorious for being very strong, very shootable, and very likely to make you wake up the next morning wearing a duct tape turban and boots filled with 3 inches of glitter will actually create a Super Liquor that transcends the tendency to make poor decisions, black out, and vomit up one's own stomach lining after a night of heavy drinking.

Vodquila vodka is made from multiple grains and distilled 6 times. Its tequila counterpart comes from blue agave plants distilled in the highlands of Jalisco, Mexico. Together, the taste is described as "super clean" with a rich aroma, thanks to the technique of blending of the liquors in small vats, and then macerating them together at high temperatures to fully fuse them into one.

Despite it being the current hipster spirit of choice, I do love me some mezcal. It is, as ol' Guy Fieri would say, flavor country. Especially pechuga mezcal, which made me gag when I first heard of it, but subsequently...

Alyson Thomas is an artist. But she used to be an attorney. So presumably she knows the value of a good, stiff drink made right. Her Bloody Mary Diagram glasses give a shoutout to all of you who worked (i.e., partied)...