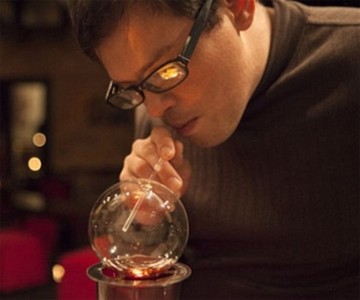 Those who do not live in Washington or Colorado, I have a consolation inhalation prize for you. A glass globe-and-funnel contraption straight out of the Real Genius chem lab, the Vaportini kit gassifies alcohol into a breathable cloud of intoxication. Instant intoxication. Calorie-free intoxication. Yes, I agree. The Vaportini is both the best and worst* culinary invention ever created.

So where to get one and how to use it?

Vaportini manufacturers currently handle sales of their kits directly. Each includes a glass globe, metal ring, plastic funnel, glass straw, and candle. Acquire a kit, and then find yourself some alcohol with a proof of 80 or higher. During extensive testing (what lucky SOBs got that job?) Vaportini wizards determined higher proofs, as well as flavor-laden spirits, produced the best inhalation experiences, imparting strong but smooth essences. Their favorites: any persuasion of Absolut; Knob Creek bourbon; Tanqueray Rangpur; and Effen Black Cherry Vanilla.

Next, obtain a pint glass. It is the one element the Vaportini kit does not contain. Then:

Note: The Vaportini is legal to sell in all states for any establishment with a “Consumption on Premises” license. Meaning that bars and restaurants can buy them in bulk and make a killing, particularly in cities such as Los Angeles and Dallas where the entire female population refuses to consume calories.

*Vaportini reps suggest that the vessel's speedy kick-in characteristic actually advocates responsible drinking. Since we feel the liquor's effects shortly after exhalation, our typical desire to knock another one back right away--or in this case, hit the straw again--subsides. However, the idea is based on the assumption that people understand what it means to have too much of a good thing, that less is more, and that overconsumption is a fundamental plague of the 21st century. Most people do not understand these things. They're why I own a dozen devices with the "i" prefix, why I'll be wearing Dress Pants Sweatpants to work until I lose the gut I gained in December, and why I had to scrape and Drain-O some idiot's puke out of my bathroom sink after a Christmas party last month.

Looks like Viski's Cigar Flask can hold one 54-gauge cigar, and one...tiny sip of liquor. OK, 2 ounces of liquor - Scotch if you're following the rules of cigar-and-booze consumption - so basically a shot...

Whoa. Check out The Bartender's Manifesto's Guide to Citrus Garnish Styles section. I am amazed. Not only at the number of citrus garnish styles in existence, but also in how this manual of How to Think, Drink, and Create...

The only thing better than a tres leches cake is quatro tequilas on top of it. These Cake Topper Shot Glasses see your fluffy yellow sponges layered with rich buttercream icing, and raise you, well, a hearty nip of liquor...

Of all the gross applications of otherwise fine foods, the VELVEETA Veltini Kit is definitely...one of the better ones. Cheese, olives, vodka, vermouth, and, and Jumbo VELVEETA Shells & Cheese?! I mean, sure, it looks...