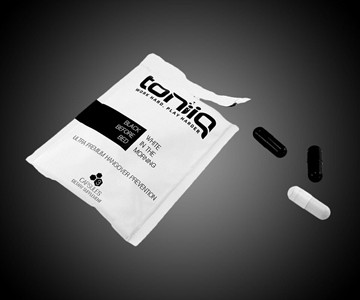 This Memorial Day weekend, I will metabolize my alcohol without damaging my liver! I will take Toniiq Lingzhi capsules the morning after my nights of heavy drinking and address the underlying metabolic process that causes my hangovers! I will not prevent intoxication, but I will thwart all of its ill effects! Particularly the one where I grab some girl's gigantic purse and throw up in it!

Toniiq aims to differentiate itself from other hangover prevention elixirs and treatment pills by remedying the cause rather than the symptoms of morning-after malaise. (Yes, Mama, I know the True Cause is drinking in excess and the True Remedy is abstinence. Now can I return to the True Reality of my Saturday nights?) The company says its single-ingredient capsules represent "the gold standard for liver enhancement, detoxification, and regeneration." They contain no caffeine, antacids, or artificially-produced vitamins, just the herb Lingzhi. Lingzhi is known traditionally as the Herb of Spiritual Potency, and Toniiq has chosen it for 3 of its major hangover-curing compounds: antioxidants, triterpenes, and polysaccharides.

When you long for a stomach pump and a cortisone shot to the head, antioxidants help restore your body by increasing its internal flow of oxygen and rejuvenating haggard cells. Triterpenes promote liver detoxification and stimulate liver cell regeneration, while polysaccharides enhance immune function. (Behold the diagram in the image gallery above.) Combined, Toniiq maintains these ingredients will successfully ease the unpleasant effects of too many Don Julios.

Toniiq's antioxidant-triterpenes-polysaccharides Mother Carrier, Lingzhi, has been in use for over 2,000 years and studied extensively in the modern age--its genome was just fully sequenced in 2012 (about 12,600 genes on 13 chromosomes). Some stated benefits of the herb include the ability to:

Lingzhi also claims other does-a-body-good powers, which you can read about here.

How to use Toniiq

To kill a hangover with Toniiq, drunk people should take the pouch's black capsules right before bed/passing out in someone's bathtub, and the white capsule upon waking in the morning. Note that Toniiq will not prevent intoxication and should not be taken before or while drinking, as it can mask alcohol's impact, thus indirectly contributing to the hangover it is intended to cure.

Why on earth would you need any sort of hangover cure, much less the best hangover cure? You can handle your liquor. You don't over-booze it. You don't drink Puerto Rican rum (anymore.) You-...

Does The Hungoevr Cookbook spotlight a small, yet decidedly porky hog on its cover because bacon is the ultimate hangover cure, or because it would also like to point out that those of us requiring a cookbook tailored...