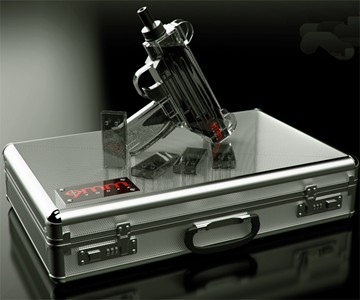 Who wants to be on the receiving end of a shot from a 9mm submachine gun? What if the shot came in a glass and made you feel weak-in-the-knees gooooood instead of weak-in-the-knees punctured in a vital organ? 9mm Vodka, an ultra-premium liquor poured from a slickly molded submachine gun bottle, is taking a third kind of shot: the kind that will project it from the virtual crowdfunding platform Indiegogo to the physical shelves of consumer bars, desks, and party spreads.

What isn't surprising is that 9mm Vodka creator Jim Denoon developed his idea for weaponized booze at the pub. But with all of our references to shooting liquor and deadly drinks and Bloody Marys out there, what is surprising is that more lines of vodka, tequila, and whiskey sold in gun-shaped vessels don't already exist. (Indeed a few novelties do, such as Hijos de Villa Tequila and this Russian AK vodka). Could it be because people acknowledge the questionable symbolism of marrying alcohol with an icon of violence? Ummm...probably it's just that no one has come up with an equal parts feasible, marketable, and cost-accessible way to do it yet. We'll see if Denoon's approach earns the reception it needs to break that mold.

In addition to its trademark bottle, 9mm Vodka will be presented in an aluminum flight case, and include 4 magazine-modeled shot glasses. The vodka itself will be 500 ml of juice from a French distillery, 40% ABV. Bottle caps naturally attach at the gun's barrel, and take the form of plastic "knurled" injection pieces that screw on and off.

9mm Vodka seeks Indiegogo funding through October 15, 2013. Note: Due to restrictions on the peddling of alcohol online, those who back the project will receive their 9mm packages without the vodka itself. Wamp, wamp. You'll need fill the empty bottle with your own vodka--or other liquor of choice--until its mass production and retail sale hit. Which isn't such bad news for me since I prefer Peach Schnapps to vodka anyway.

December 2013 Update: While 9mm Vodka crowdfunding was unsuccessful, its creators are still hoping to produce and sell the fully-loaded liquor containers to the public through the company's Website--follow the link below to track their progress.

Set the mood for a hot party, fiery drinks, and a roarin' hangover with this Dragon Decanter. Aesthetically, the decanter is more Chinese New Year celebration than Drogon Targaryen drowning his my-mama-is-dead sorrow...

Tom Brady is #1 again! One finger over, for some of you dudes. And for those who can't bring themselves to celebrate Tampa Bay's Super Bowl LV win, here's Middle Finger Decanter to help you drown your sorrows, and continue...