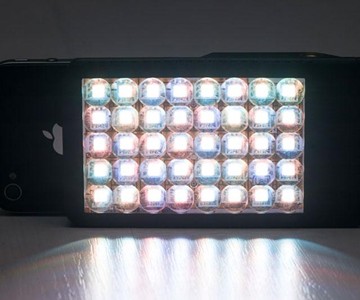 $149
from DudeIWantThat.com »
Check It Out

Get the KICK flash for your smartphone, DSLR, digital, or video camera for $30 off regular price. Head over to the Dude Exclusives online store by August 6, 2014 to take advantage of the deal.

At about the size of the smartphone it accessorizes, the KICK lighting studio takes a new take on taking images, namely producing photos and videos with perfect exposure and the user's choice of countless effects on every go. The KICK flash is lined with a panel of 40 adjustable and rechargeable RGB LED lights whose 400-Lumen output is twice as bright as most police flashlights. KICK also adds a Smart element to its operation when paired with the free KICK app; users can manipulate the app to achieve total control over brightness, color temperature, animated light, and built-in video effects. The app can also recreate any color or effect from the world around you. Like if you're sitting at a campfire and want a blazing flame effect, just point your smartphone in its direction, tap the screen, and watch KICK emit that same light.

If you're not into apps, KICK can also be controlled manually.

KICK functions with both iOS and Android platforms, as well as pairs with non-smartphone recording devices, such as DSLR, digital, and video cameras.