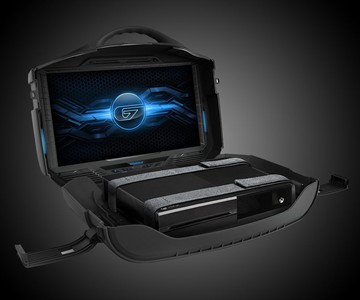 GAEMS calls its Vanguard a "premier Personal Gaming Environment (PGE)" and I hope they're right because to me it just looks like a TV screen and some speakers built into a briefcase. To give them the benefit of the doubt, we'll go over the specifics. The Vanguard was designed for gamers on the go. Its protective hard case houses a 19" LED HD display, a pair of stereo speakers, two 3.5mm stereo headphone jacks, and a placeholder for your gaming console.

The Vanguard is compatible with Xbox 360, Xbox One, PS3, and PS4, and GAEMS touts its latest PGE for both its immersive, fully portable gaming and DVD / streaming media experiences. In addition to the "optimal viewing angles" the system's screen provides, built-in volume and brightness controls further calibrate the interactive journey through game land or film land to your express liking.

The Vanguard PGE is currently available in a standard Black Edition, and will be available as a limited Street Fighter V Edition beginning February 16, 2016. The latter has been designed especially for the specifications of the fighting franchise's latest release.