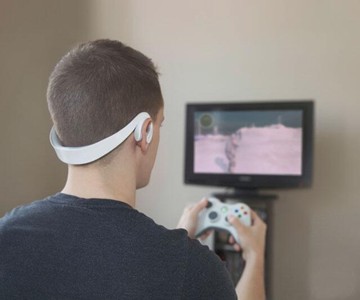 My 13-year-old nephew has had gamer rage for, like, 5 years now. Oh man, he used to get SO MAD when the levels got harder in Super Mario Galaxy. Sometimes, if he knew he was about to die, he'd pause the game, hurl the controller at the floor and just run out of the room screaming and dropping lexical bombs I never learned until I was at least a sophomore in college. If Sam Matson proceeds with mass production of his Immersion headset prototype--or is even looking for beta testers along the way--there is going to be one big, shiny software-integrated biometric feedback system with little Kaleb's name on it.

Said to be growing and spreading within the gaming community, gamer rage is defined as "intense frustration resulting from playing a video game." Immersion seeks to help players gain control over that rage, and therein ease their frustration, by incorporating a headset that monitors heart rate into gaming software.

Matson chose heart rate because it serves as a basic indicator of a player's stress levels. When these levels rise, physical responses include muscle constriction, sweating, and elevated heart rates. Of the 3, heart rates tend to be the easiest and most accurate biometric to measure and track.

Using a pulse sensor positioned at the wearer's ear, the Immersion headset is able to detect and approximate heart rate continuously. Its microprocessor sends this information via Bluetooth to a compatible video game, which uses the feedback to adjust its own actions.

Currently, Matson has custom built one computer game to work in tandem with the Immersion headset. Using the Unity game engine, he modified the Bootcamp template with his own enemy AI, plus an OSC reader to interpret the pulse sensor's data. When a gamer wearing the Immersion plays Matson's game, his or her heart rate data cues the software to adapt its environment and characters to reflect the gamer's presumed state of being.

As depicted in two of the photos above, when Immersion senses a calm, steady heart rate the game is easier. Enemies are fewer and weaker. As the gamer's heart rate escalates play becomes increasingly difficult. More enemies and enemies who are more difficult to kill emerge. The goal over time is to train gamers' minds to stay calm, manage the stress of gaming more effectively, and ultimately level out the extreme emotional and physical manifestations of gamer rage.

Whoa. Talk about an augmented reality arcade game. These cats aren't just 3D, they're eerily lifelike, from their bright eyes to their swishing tails to their fur that...actually feels like fur! Holy...oh. Wait. These...

20 Gifts for Every Mood

Life: it's a whole mood. Which is to say it's a mashup of all the moods. Here, I've picked out 20 of them, and paired them with a gift, a product that either exemplifies the mood and the feelings that come with it, or...

Feel like throwing your controller or smashing your console? Grab a SEGA Genesis Interactive Plush and take out your aggressions on its smooshy controller and pillowy, 16-bit system instead...