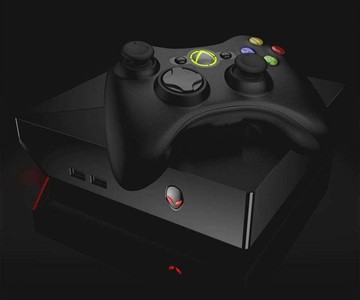 It started shipping only a couple days ago, but Alienware's "substitute" Steam Machine, the Alpha PC gaming series, has already gotten a lot of ambivalent feedback from blog reviewers and buyers alike. Me? Well, my mama says she's not paying $500 for "another box" so I guess I won't know firsthand until my little buddy Ollie down the street gets one and invites me and my friend Cornelius over to play it with him after he finishes his homework.

For its part, Alienware believes the Alpha merges PC gaming freedom with console convenience. Navigate its custom user interface with the included Xbox 360 wireless controller instead of a keyboard and mouse. Use online community Steam Big Picture to access and instantly download thousands of Steam games. Or stream your choice of media in 1080P HD on big screen TV.

Alienware also promotes system upgrades, calling the Alpha user-accessible for swapping in a newer CPU and adding RAM to improve in-game performance and background application multitasking. However, the console's GPU cannot be altered, and critics grumble that the Nvidia 860M it's modeled after is already outdated, and won't be able to keep up with forthcoming games.

Evercade VS is making the old new. Or, better put, the forthcoming console is introducing retro gaming to present day tech. The most notable attribute of the VS is it is game for play by up to 4 players simultaneously...

If fitness instructors with boundless energy and endless inspirational sound bites, or filmed rides through the French countryside and Swiss Alps aren't enough to get you on a stationary bike, Playpulse is hoping immersive...

WD_Black P10 External Game Drive is for all ye space hogs, sheet-stealers, and more-is-more kinda kids out there. Compatible with Playstation, Xbox, and PC gaming consoles, the WD_Black P10 provides between 1TB and 5TB...