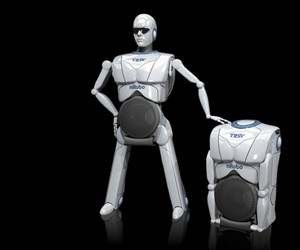 TOSY Robotics, a Vietnamese high-tech toys manufacturer, plans to make its portable speaker/dancing robot one-two punch available to all of us who aren't of the Justin Bieber persuasion this fall. mRobo holds about 500 of your favorite songs, and when the beat starts a-thumpin' from his chest, he starts a-bumpin' from the rest. Arms and legs unfurl, his head rises from his neck, and what can only be described as the Michael Jackson transformer Joe Jackson is KICKING himself (or rather, his wife, and perhaps that kid Blanket) for not thinking of, comes to life. The robot connects for downloads via USB, and, unlike you, gets his juice from batteries instead of Red Bull and Ecstasy. mRobo will also dance to music from other devices. Provided, of course, it isn't a JLo song, in which case instead of dancing, he will approach the human playing DJ, and begin repeatedly punching him or her in the face.

Conduction Labs Allegro Earphones send audio right into your earhole without ever touching it. Kind of like how your brother used to dangle his finger in front of your face, sending peak levels of annoyance and rage right...

"Amagami" is a Japanese term for the inclination and act of babies and pets nibbling on your finger. And apparently this finger-nibbling - presumably without drawing blood or causing a nasty foreign saliva infection -...

While I can't play a guitar, and know nothing about guitar builds and quality, I do LAVA ME some carbon fiber, and LAVA's LAVA ME 2 unibody guitar is made with Super AirSonic carbon fiber material. And not only to make...