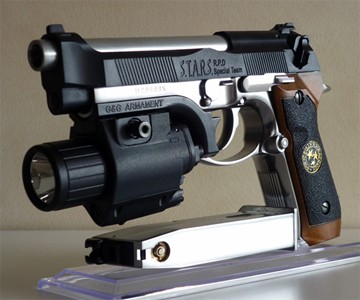 Anyone need a standard-issue S.T.A.R.S. line of defense? San Diego's Kendo Gun Shop has replicated Albert Wesker's customized Samurai Edge as a superbly realistic Airsoft Handgun for the awe and admiration of all Resident Evil fans, and the personal collection of the first three to pony up $360.

Wesker's customization of the Samurai Edge includes putting the gun's black slide on a silver lower frame, and adding a black hammer and laser/light attachment below the barrel. Kendo Gun Shop maintains Wesker's style with a piece both visually accurate, and 100% functional as an Airsoft pimped out with moving parts and operable flashlight. Along with the gun and laser/flashlight device, the Samurai Edge package comes with an under-rail mount, threaded orange tip, magazine, and manual.

Other Resident Evilicious features and specs: