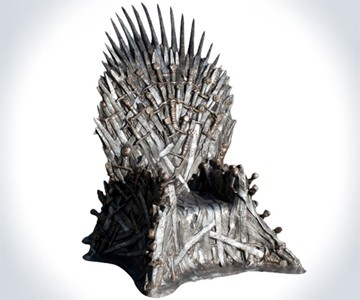 Since I'll just be sitting around, withdrawn and forlorn, waiting for Season 3 of Game of Thrones to start anyway, I may as well have some small, $30,000 token of the series to keep me from sinking into irreversible despair over the course of the next 9 to 10 months. HBO's recently debuted Iron Throne Replica, a life-size version of the one from which Robert Baratheon, Ned Stark for a moment, and now that inbred psychopathic F-wad Joffrey have ruled Westeros, costs a teacher's salary, but once I'm eating pork pies and shouting orders at my dog from the embrace of its jutting spikes and jagged edges, spending Mrs. Lane's annual income on a prop will only be a reminder that she taught me well.

Unfortunately for thieves with forklifts, HBO does not seem to keep its warehouse stocked with Iron Thrones, but makes them to order, so purchases take 6 to 8 weeks to ship.