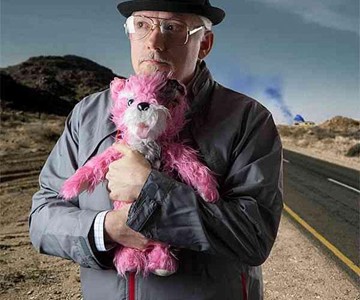 The Breaking Bad pink teddy bear. It fell from the sky. From innocence. From grace. Lost an eye. Suffered massive burns to its left side. But it survived. It even landed in a swimming pool, so it wasn't just saved, it was cleansed. Saved from the thankless and mundane life of a high school teacher. Cleansed by the dazzling blue crystals of the best meth in the land. Oh the symbolism!

Actually I guess the meaning of the teddy bear, and the dislodged teddy bear eye that Walter White kept as a souvenir, is up for interpretation. Better news though: the bear itself is up for sale. Dealer ThinkGeek is also doling out pink teddy bear eyeball keychains as a free add-on to purchases while supplies last...or until they get busted.