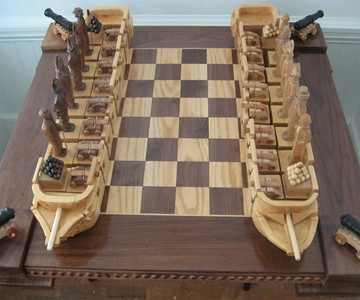 We can all appreciate the creative skill, labor, and craftsmanship Jim Arnold poured into his elaborate, entirely hand-carved War of 1812 Chess set. But those of you out there who actually know what the War of 1812 is, and which parties fought in it, and in what year it took place? This immaculate representation of intellectual prowess is your Excalibur. Your mint condition Model T. Your Tron Light Cycle. Your interstellar life-coaching session with Yoda.

Carved from solid walnut and maple, the chess board alone weighs 50 pounds, and spans 36 square inches. Atop the quadrilateral map of cunning is a museum-quality miniature re-enactment of the United States' first victory at sea. A 34" long USS Constitution throws down against the Brits' similarly-sized Guerriere, with captains subbing for kings, lieutenants for queens, mid-shipmen for bishops, gunners' mates for knights, cannon balls for rooks, and deck side cannons for pawns. All personified pieces don authentic representations of period uniforms.

The set's intricacy and magnificence achieve an even higher level of awesome with the reiteration that no dremmels, duplicators, pantographs, foredoms, or similar persuasions of carving machinery were harmed, torn down, exploited, manipulated, bullied, stolen from indigenous peoples, persuaded under the influence of alcohol, made to feel inadequate, or otherwise shat on in the making of the War of 1812 Chess Set. The board, its "24-pounder" cannons, ships, and pieces were wittled by Arnold's own hand into this laudible and unparalleled display of patriotism and historical ass-kicking.