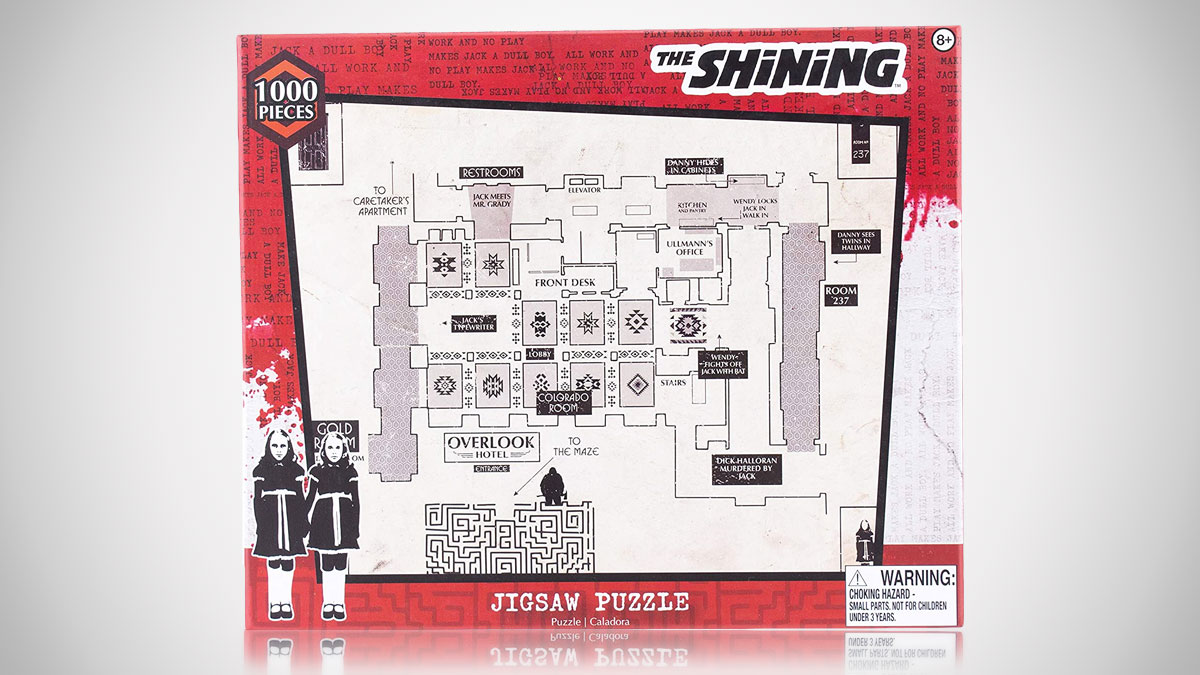 Really? When turning horror classic The Shining into a jigsaw puzzle they went with the floor plan of the Overlook Hotel rather than Nicholson's Heeeere's Johnny! face busting through the door?

Well. Maybe the second one was too scary for the kids.

The floor plan concept - and its vintage, perhaps supernatural-infused appearance - isn't a bad one, actually. In addition to the Overlook's basic layout, various areas of the haunted hotel are marked as notable locations or events in The Shining. For example, there is "Jack's Typewriter" and "Ullmann's Office," and also "Danny sees twins in hallway" and "Wendy fights off Jack with bat."

Bordering the hotel floor plan of the 1,000-piece puzzle are additional Shining icons you'd probably rather not think too much about at night. The door. The key to Room 237. The maze. The shiver Grady twins.

For those into Stephen King's novel / Stanley Kubrick's film, scary movies in general, or fun family Halloween activities, the Shining Floor Plan Jigsaw Puzzle is a cool tribute that, unlike the flick itself, won't give everyone who sees it nightmares.

I scream, you scream, we all scream for...bathtime? Happy splashing, happy blowing, happy skin-softening, and happy Halloween from the Screamo Cherry-Scented Bubble Blower. An inspired seasonal release from Lush, the...

COVID and serial killers have made jigsaw puzzles so popular! The latter, John Kramer from the Saw film series, is the real inspiration behind this Jigsaw Puzzle Piece Prosthetic from Etsy shop Locked in the Cellar, but...