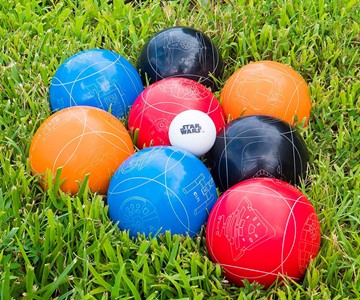 Also, it seems like maker Kelsyus could have done a little more to distinguish the Star Wars universe as part of their lawn game set. Sure, the bocce balls are etched with either Dark Side or Rebel icons - Vader, R2-D2, stormtrooper, various ships - for easy team designation, but why not make the entire ball a Star Wars character or object? The Death Star and BB-8 would have been no-brainers.

Still, if you're into Star Wars, but like to keep the obsession understated, the Star Wars Bocce Ball Set doesn't scream geeky fanboy like some other SW merch does. Chewbacca sofa, anyone?

Hey ScoreCaddy, HMB while I sink this bag in the cornhole. And while you're at it, tick that blue marker up 3 points. The ScoreCaddy from GoSports keeps lawn game players honest and hydrated - or drunk and not responsible...

You don't need to buy a set of Slip, Sip & Flip to play a version of flip cup meets the waterslide. Not as long as you have an old Slip 'N' Slide - or, better, Super Slide - stuffed in the garage, and a folding table...

You'd think the Wingball would throw like when you have a bag of pork rinds and your friend Cornelius wants one, so you try to toss it to him instead of either of you getting up and walking the 7 steps to do the exchange...

The Aerobie Sonic Fin Football sees the Wingball's 88MPH throwing speeds, and offers up its own feat of foam football strength: a pro-level throwing distance of up to 100 yards. You know, like, Russell Wilson-style...

The water, it is an illusion. And in this cornhole set, the epoxy creating the water illusion is an illusion too. Cornhole Solutions uses UV ink to print the swirly wood and epoxy river design on its Baltic Birch cornhole...