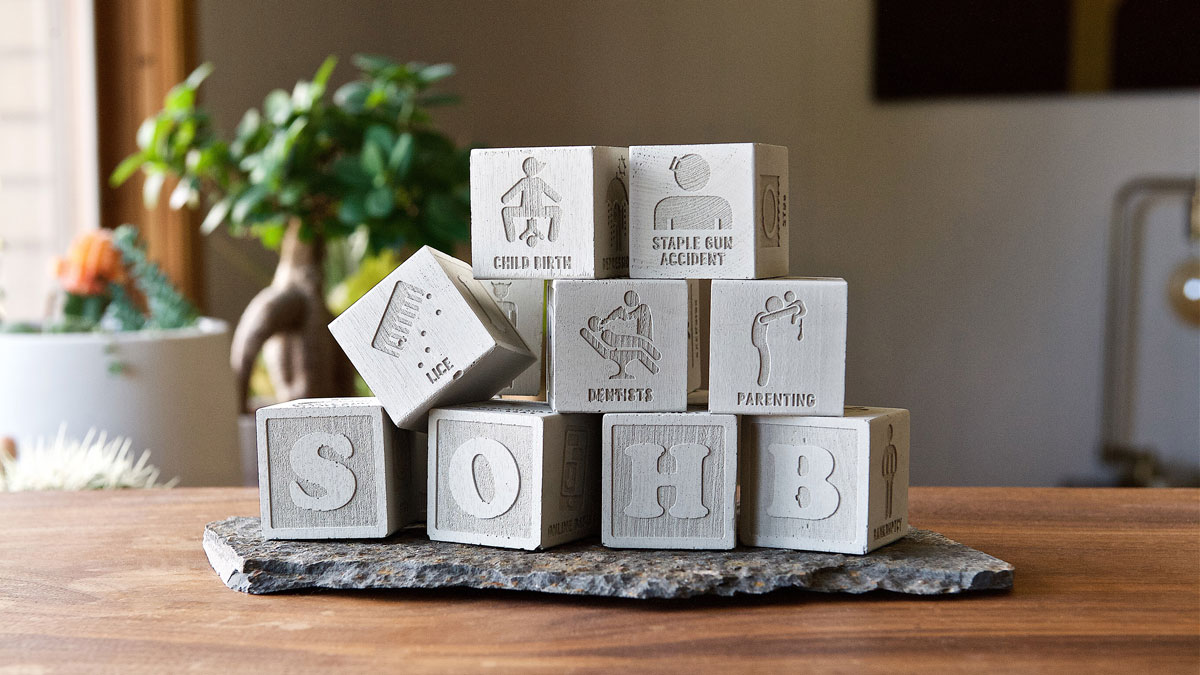 $25
from School of Hard Blocks »
Check It Out

The School of Hard Blocks is a set of 12 alphabet blocks modeled after the traditional wood children's blocks, but made of concrete. And made for adults who need to learn, ponder, or build up their own ABCs. Adultery. Bankruptcy. Colonoscopy. Divorce. Existential dread.

Use the School of Hard Blocks as desktop art, a white elephant or novelty gift, or build them into a 3D vision board depicting all the shit in life you're going to avoid...at least the second (fine, third) time. Since one face of every block also has an etching of its starring letter, feel free to use them to spell out the words that bubble up from your gut when you see topics like "STD," "Erectile Dysfunction," and "Dentists."

Or just throw a few Hard Blocks to burn off the steam. They're concrete, they'll land satisfyingly hard. Might even break something. Like your ex's car window.

From name to execution to creator SKW design firm's own description of their product, I gotta say, The School of Hard Blocks is as clever and fun as it is cynical. If you agree, head over to Kickstarter and grab a set of your own Hard Blocks through October 30, 2017.

16 Gifts for Kids the Adults Will End Up Playing With

Adults can't keep their fingers of out the gifts for kids pie no matter what the toy or gadget is - I mean, someone has to fight with the packaging and conquer the assembly - but when I say I've found 16 gifts for kids...

Why does this ChoClit taste fi-...naaah, I'm not gonna say it. Especially since ChoClits seller Firebox has already done one better than I ever could with their description of what I'm sure is a generally genitally delicious...