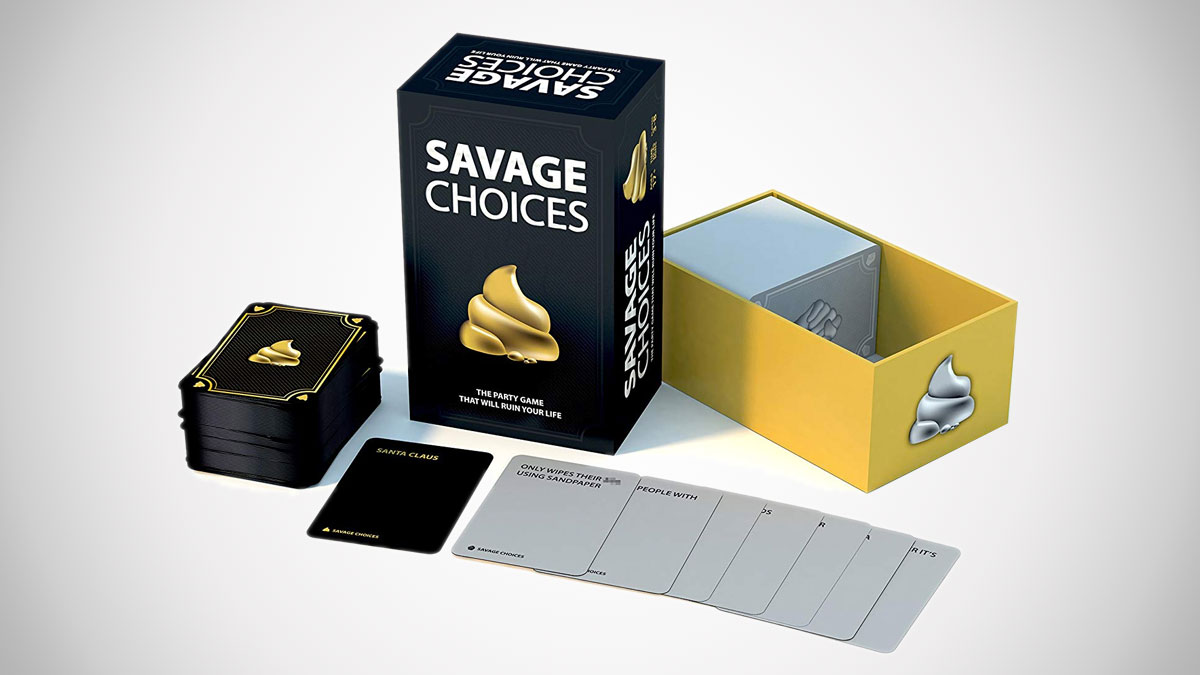 I think the Savage Choices logo is a golden poo because it represents the kind of accomplishment any winner of the party game will feel: superior and triumphant, yet also like shit.

Savage Choices calls itself, "The party game that ruins lives" because rather than building offensive Mad Libs about random people and topics, players in this round-robin card game build them about one another. Like Cards Against Humanity, each Savage Choices round designates a new player as Judge. The rest of the players, drawing from their hand of cards, must select two to present before the judge, and then convince him or her to pick them.

So what's on the cards? NSFW content, to be sure.

Black Savage Choices cards, character cards, contain names of famous or infamous people. Santa Claus. Dracula. Kim Jong Un. Jon Snow. White attribute cards have descriptions of what a character might do - his or her most prominent trait. Such as "Always has the hiccups," "Smells like a homeless person," and "Kills a child every time they orgasm."

So whereas normally in these sorts of card games the round's judge has the luxury of selecting cards and deciding who gets a point, in Savage Choices, the choice could be between living out the rest of his/her life as Jesus who tries to seduce elderly people, or the Devil who will never hit puberty.

Savage Choices recommends gameplay continue "until you hate yourself."

A Visual Learner's Guide to Being a Grown-Up

Dying kind of sucks, but sooner or later, we all go through it. And rather than dwell on where we are or aren't going when the reaper (or Looper) calls our name, we at Dude prefer to think about what we're coming back...

My sense is that this year was not anyone's Best! Year! Ever! But even if it was, you probably racked up at least a little bad juju you'd like to get rid of as we head into the New Year. Like credit card fraud, an illness...

Grow the F*ck Up

Grow the F*ck Up, you had me at "Giggle and shart." John Kyle's approach to teaching teens and young adults how to survive and, more importantly, make something of themselves in the world outside Mama's house is blunt...

Spy Secrets That Can Save Your Life

We've heard what a Navy SEAL has to say about spitting in the face of danger and disaster...or at least walking away from them alive and safe...so I figured we might as well let a CIA officer weigh in on the topic too...

Oh, the Places You'll Eff Up

Know someone who's about to graduate college? Stressing, lying awake at night thinking, Now what? For me it was business as usual. Chillin', mowwin', gamin' at my mama's house with my friend Cornelius. But then one day...

How to Survive Anything: A Visual Guide

Survival isn't just about learning to live in a world turned on its head, to build shelter in a sea of sand, or to fish with a bobby pin dangling from a shoelace. As Lonely Planet so expertly depicts in their recent graphic...