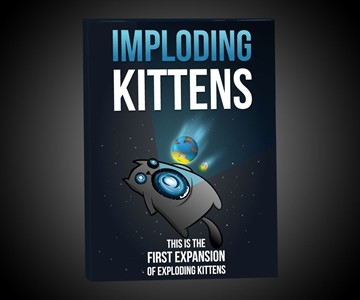 You've been dodging Exploding Kittens for quite a while now, so the people who wire them have decided to give you a new challenge: dodge more exploding kittens with a 20-card-strong expansion pack, and add a 6th player, courtesy of an Imploding Kitten, to your feline-coated game of Russian Roulette.

Imploding Kittens includes 20 new Oatmeal-illustrated cards that are compatible with your existing Exploding Kittens deck (Imploding Kittens is not a standalone game.) In addition to the super sweet addition of a kitten in the midst of a violent inward explosion, the expansion set includes "a super secret surprise" with each purchase.

Unfortunately, it doesn't seem that this first Exploding Kittens expansion back is as dirty as the game's NSFW edition, but if you want new stuff so bad you're even willing to keep it PG, the new cards will incorporate into either version of the Exploding Kittens game.

Fowling is pronounced like "foal" not "fowl," but it's not fooling anyone into thinking the majority of gameplay is going to consist of the latter. In both iterations of the homophone. Combining football and bowling into...

How to Survive a Garden Gnome Attack

The 12-inch menaces are coming for you! You might think How to Survive a Garden Gnome Attack is a parody, a humorous manual for the coffee tables of lawn ornament enthusiasts. But consider how garden gnomes have evolved...