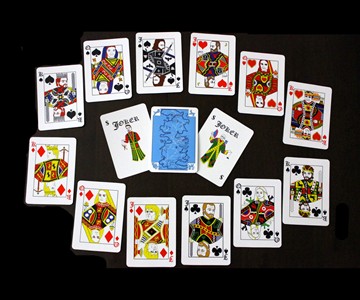 Game of Thrones Season 2 and A Song of Ice and Fire Book 2 pit Joffrey, Stannis, and Renly Baratheon against one another for the Iron Throne, while Robb Stark mucks things up even further accepting a crown as King in the North (at least that part doesn't last for too long). Matt Kirkland of Etsy shop Joker and the Thief has hand-illustrated a deck of playing cards centered around these 4 "kings" and in the style of the Bicycles we all know and love almost as much as George RR Martin's world of Westeros.

Kirkland prints his Game of Thrones playing cards on casino-quality 300gsm cardstock, with suits and characters represented as follows:

I know the Mandalorian Playing Cards are named after The Mandalorian and all, but really? Grogu isn't the character theory11 picked for the King? Is Migs Mayfeld at least the Joker?...