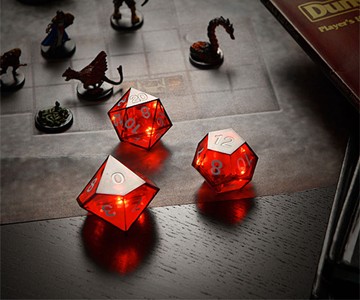 I'm gonna take a gamble and say that if you're reading this right now, right this moment (this moment being approximately 8 pm ET on February 1, 2015) you're not really into Super Bowl XLIX, or football in general. I mean, maybe you like the beer and jalapeno poppers and smoked brisket chili that go along with it...with all 5 hours of it...but in terms of the game itself...hey, speaking of games, anyone want to play some D&D? Aw, come, on I just got these sweet red LED dice, and there's nothing going on right now anyway! It's a commercial!

Think Geek previously issued a Critical Hit LED d20 die. I think it was pretty popular. At least enough of a cash cow that they now have an entire set of flashing gaming dice for the raving RPG fanatics. The Critical Hit LED Dice Set includes a trio of rollers, with d10 and d12 joining the incumbent d20. All flash red when their highest number is rolled.

LED dice come with batteries included, but said batteries are non-replaceable so as to accommodate the dice's silicone filling, which ensures their weight is evenly distributed and they roll cheat-free.

Ako Dice are what happens when an architect gets his hands on the gaming world. Kacha took his architecture background to product design with a trio of Kickstarter campaigns. Here you see his latest and most successful...

When he's not terrorizing Nordic ships The Kraken enjoys a good game of Skulls and Shackles. So when 3D artist Nvenom8 approached him with a merchandising opportunity, the behemoth beast of the sea wasn't just willing...