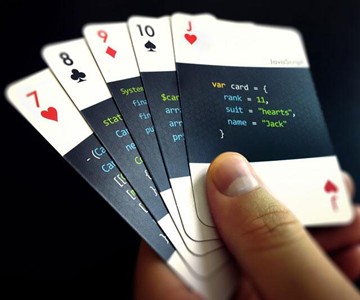 Who wants some undiluted geekery? code:deck is a standard set of playing cards individually described by rank and suit in one of 13 different programming languages. As maker Varianto:25 points out, the cards should arouse the left brains of programmers, QAs, and IT students. And, I would add, any who are just proud to spend most of their days speaking languages that will never get them laid.

Varianto:25 tried to include a broad selection of programming languages in code:deck, "from generally acknowledged staples and utility languages in software development to newer alternatives and weird curiosities." In other words, they run the gamut from HTML to Brainfuck. Languages have been divvied between each rank of card as follows:

Samples of all of the languages laid out on a code:deck card can be viewed on the Varianto:25 Website FAQ section.

Yes, they shuffle. But they can't do the bridge/easy stack after the riffle, so if you want a deck of carbon fiber playing cards, you'll have to be willing to press them together and realign them into a neat pile yourself...

Each of the 54 cards in Dan & Dave's Ultimate Deck brandishes a unique piece of artwork courtesy of design agency Stranger & Stranger. And yes, most of them are macabre and vaguely disturbing like the Unicorn Head Mask...

In a world where all people are treated a equals (except women and minorities and dwarfs and handicapped people) we approach a time where we need everything to be equal. No card gets special treatment. They all must look...

Black like my ex's heart, and black like the magic I'm going to use to make her rue the day she left me crushed and dejected inside a four square. Anyone who wants to know what's wrong with me, here's your answer: 1)...