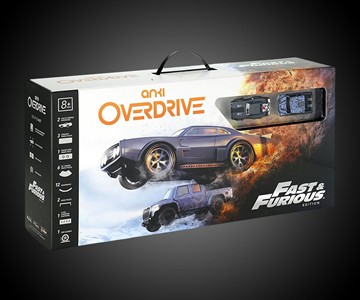 Anki OVERDRIVE goes Fast & Furious with its Toretto-tinted edition, set to start shipping later this month. If you're not familiar with the Anki gaming family, meet virtual REAL-ality. A simple car racing game in fundamental nature, Anki OVERDRIVE aims to transport the best elements of on-screen speed competitions to a tangible track with tangible cars laid out on your living room floor.

Anki OVERDRIVE's Fast & Furious edition lets you choose whether to race alongside or against the rest of the Toretto crew, and incorporates the characters' voices to add some extra flash to the excitement. As you win standoffs, you'll accrue points for your car, redeemable for upgrades in car weapons inspired by the film.

Anki OVERDRIVE track pieces are magnetic, and snap together in 8 different configurations. You can also add expansion tracks, supercars, and supertrucks to the battlefield. The Fast & Furious Edition is compatible with all other accessories from the Anki OVERDRIVE universe.

No racing, or even rolling, these Hot Wheels, but if you're a GAM* looking to preserve your love of your favorite childhood toy, screw a few of DaRosa's drawer and cabinet knobs onto your dresser, desk, or kitchen cabinets...