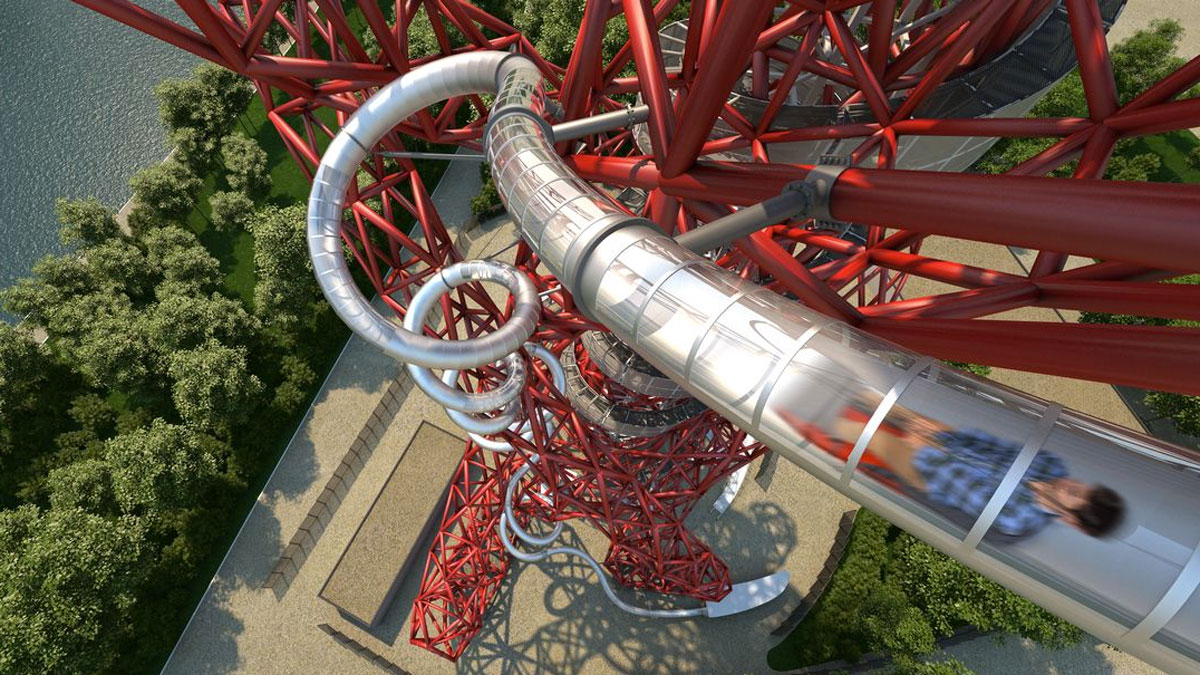 Virtual reality may be a rising star, but the ArcelorMittal Orbit is going all-out, balls-to-the-wall IRL this summer with its curving, spiraling, plummeting tunnel slide. Dubbed simply "The Slide," this 584-foot-long adrenaline rush will open to the public on June 24, 2016 as both the highest and the longest tunnel slide in the world.

Sculptor Sir Anish Kapoor and engineer Cecil Balmond designed and erected the ArcelorMittal Orbit for the 2012 Olympic and Paralympic games in London. Looming over Queen Elizabeth Olympic Park the futuristic geometric stunner is England's largest sculpture. Its construction includes 35,000 bolts and enough steel to make 265 double-decker buses (60% of that is recycled steel from washing machines and used cars).

This year, with the addition of Kapoor and Belgian artist Carsten Holler's dramatic chute entwined with the ArcelorMittal Orbit's catawampus ladder formations, eager sliders will be able to take a presumably exhilarating 40-second decent through what is sure to become London's second most famous tube. The slide will have both transparent daylight segments and opaque sections of darnkess to weave and corkscrew through as participants make their way around the ArcelorMittal Orbit 12 times. The final 160+' is a straight run back to the earth.

You can trust me when I say this Mechanical Metal Jellyfish Kinetic Sculpture from MCA Studio is the coolest thing you'll see all week - all month if you're really into kinetic sculptures or jellyfish, all year if you're...

A one-person all-terrain vehicle that doubles as a personal watercraft. I don't like these studious, clinical terms for the Quadski, which is better described as a fat amphibious wad of adrenaline with a BMW engine. Gibbs'...