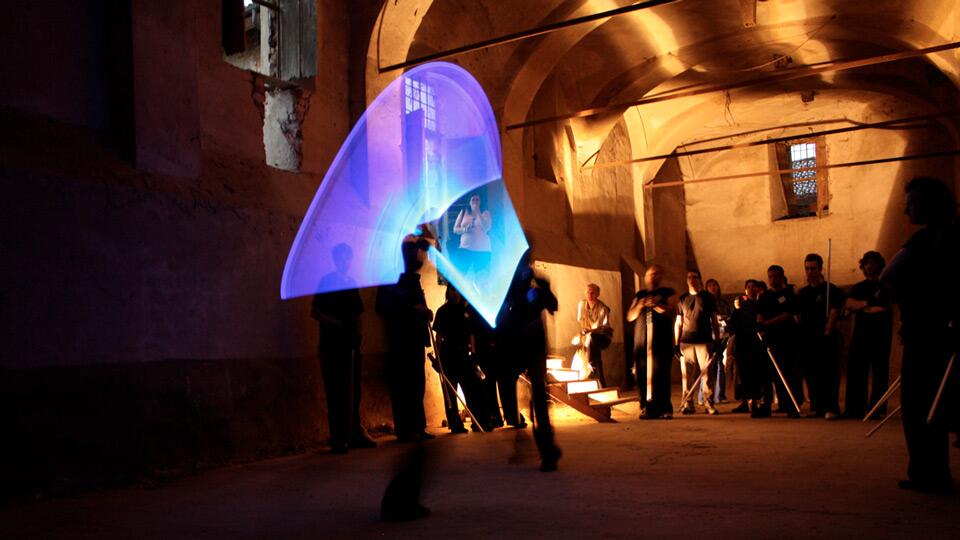 How is it possible that the Italians--the Italians!--are the first people on Earth to create a nationwide franchise of lightsaber combat academies? If not the US I could maybe, maybe see Japan taking the lead here, but Italy? Damn. America just got served.

With 7 locations spanning from Milan to Vercelli, LudoSport trains would-be Jedis and Siths in the art of plasma sword sparring. Through series of lessons, clinics, seminars, and tournaments, the self-ordained Masters of the Saber teach eager students seven different styles of lightsaber combat as preparation for their tryouts to join the Light Side or the Dark Side when the Rebel Alliance and the Empire rekindle their war on the streets of Detroit in 2016.

What? Scientology is a religion based on science fiction. Is it really so far-fetched to think a sociopolitical system based on Star Wars can't be in our future too?

One thing I'm not clear on is how LudoSport figured out which principles and art forms to assign to each of the seven styles of lightsaber combat they teach. From what I've read on their Website, they don't really know either. Or maybe there's a language barrier. Either way, I'm not gleaning much insight from statements such as, "The seven combat styles each have different characteristics, from which it is relatively simple for an expert to extract some movements which represent that particular combat style." Or, "...Lightsaber Combat does not derive from any other combat art in any way. This is because the various sports that inspired Lightsaber Combat have not been used to supply single movements or techniques, but solely aspects that could be adapted to the instrument that this sport uses."

Still, a review of some of the above videos at least makes it clear that students of the Jedi/Sith battle discipline are doing more than throwing erratic swings and awkward heaves. They look like they're fencing or Filipino stick fighting or professionally LARP-ing, all of which sound like a pretty alright time to me. The seven styles of lightsaber combat, and their vague influences, are as follows:

Taking part in LudoSport's lightsaber training requires Combat Academy membership (about $55/year), plus payment of individual course, seminar, and tournament fees. They supply the lightsabers, made largely of aluminum hilts, soft polycarbonate tubes housing a reflective film, and electronic parts for movement sensors and sound effects. Anyone ages 8 and older can join the Academy. However, only those with the Force will survive it.

You've seen Saber Forge's custom made lightsabers around here before. But now the company is taking to Kickstarter to give you the opportunity to do the custom making yo