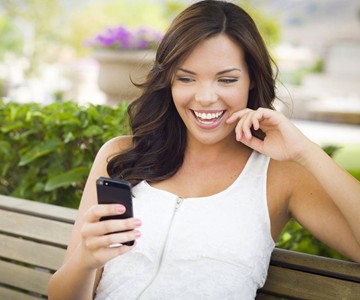 $25
from Invisible Boyfriend »
Check It Out

Invisible Boyfriend may have just gone viral, but Wish.co.uk--and I'm sure a load of other apps and services--have been churning out realistic-ish virtual sig o's for a while now. Still, Invisible Boyfriend has somehow managed to achieve new levels of popularity amongst singles whose family and friends constantly pester them about their status, or who need solid evidence of a relationship to get the skeev-o at the gym to back the F off. And take the sweaty stench of his Sex, Weights & Protein Shakes shirt with him.

Open an account with Invisible Boyfriend, hand over your credit card for a monthly $25 charge, and build yourself the ideal man. Choose his name, his interests, his salary, what he looks like, what pet name he calls you--get creative. Get specific. Selective. Demanding. Basically, be yourself. Invisible Boyfriend and its network of real live (yes, no bots here) staff of virtual lovers will be there to send you love texts, reply to your messages in Olympic trial time, and carry on entire, legitimate, pertinent convos you can then show off to your mama to get her to shut her piehole about spinster-dom and the amount of pie you're currently stuffing in yours.

And when the fam wants you to bring Invisi-Bo over for Thanksgiving dinner?

Now what I think is really fascinating here is that the service getting all the attention is Invisible Boyfriend, even though dudes can use its sibling to create an Invisible Girlfriend too. It's like everyone assumes the app is targeted primarily towards women because they think single ladies of a certain age are way more pathetic, desperate, and chastised by their family and friends than single men. Which is absolutely correct, but I mean, I'm just surprised our progressive and liberal media is ballsy enough to be so blunt about it.

Another compelling attribute of the Invisible Boyfriend/Girlfriend ethos is that the service's creator, Homann, also sees it as a means of cushioning the scrutiny on members of the LGBT community who don't feel comfortable living openly yet. Men and women with no desire to share the company of a member of the opposite sex can now give the illusion of having a "proper" boyfriend or girlfriend on a completely virtual medium.

And you thought you had run out of good ideas for date night. The Clone-A-Willy Penis & Balls Molding Kit will put your relationship skills to the testes, requiring both partners to perform dick moves to assist one in...

And when I say The Lady Presents: 29 Holiday Gifts for Women in 2021, I mean The Lady presents. As in, my lady. She-Ra: Princess of Power. I swore I would never mix business and pleasure, but when my wife saw me about...