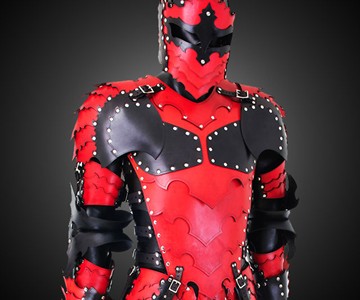 So this Dark Knight isn't quite like the Dark Knight you and I are used to. Well, I mean I guess he would be if our Dark Knight lived in a 16th century video game and were as into the color red and the world of S&M as his buddy Robin is. But even though this leather-clad Dark Knight's ride is more likely to emit horse shit than horsepower, put him in the right setting--Comic-Con, the next big LARP convention--and his suit of armor could still send a ripple of ahhh's through the crowds and command deference from all who cross his path. Or maybe he'll just get asked to pose in a bunch of photos with people's kids.

Imperial Armories' full suit of Dark Knight armor is for men--and bold, badass women--"with no compunctions or regard for pleasantries." (Whoa, that totally sounds like me. The only issue is that I'm not sure I could don this battle garb without acquiring heat stroke and passing out within 15 minutes. I have a very touchy hypothalamus. My life is so hard.) Included in the set to cover every inch of one's head, shoulders, knees, and toes:

Hide-and-stitch aficionados will make the armor to order in buyers' choices of leather, hardware, and color. In addition to red, armor color options include blue, black, green, brown, yellow, tan, and rainbow combos.