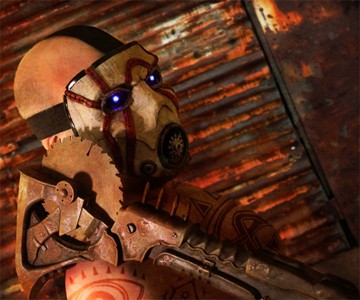 I'm not the biggest Borderlands fan. The name alone carries enough of an allusion to Canada for me. Then once I see a Psycho with those penetrating indigo eyes and a mutilating buzz axe...shiver...it just conjures too many memories of my harrowing experiences with the calamitous Canucks. There's a reason they have an international reputation as maniacal bandits, you know. And why Canada is widely considered the most dangerous place on earth, next to Baghdad, Iraq and Bogota, Colombia. Such ornately realistic 1:1 replicas of Canadian lunacy and the havoc they wreak on those who enter their territory...I don't care if this particular Psycho mask and buzz axe exist under the technical umbrella of a mere video game, I know who they really represent, and I'm staying far, far away.

Those brave enough, or just into Borderlands enough to look past the Canada factor though should find Steven Smith's Vault-obsessed bandit gear most impressive. The mask includes functional blue LEDs, which don't impede vision, and has been hand painted and weathered with acrylic paints. The buzz axe is a resin model, also hand treated with acrylics.

This Mini Knife Set probably won't be your most useful piece of EDC, unless your goal with EDC is to be able to whip out implements that make the ladies go, Awww. ... Uh, implements not permanently attached to your body...

Let me axe you: do you need a tactical tool with an SK-5 carbon steel blade and glass reinforced nylon handle to assist you in your camping, survival, or other outdoor pursuits? Would it sweeten the pot if this tool were...

Leave your enemies be, and hack up the ones you love with this Viking Pizza Cutting Axe. And by the ones you love, of course I mean the Sausage Supremes, the Margheritas, the Veggie Lovers, and the Pepperonis...