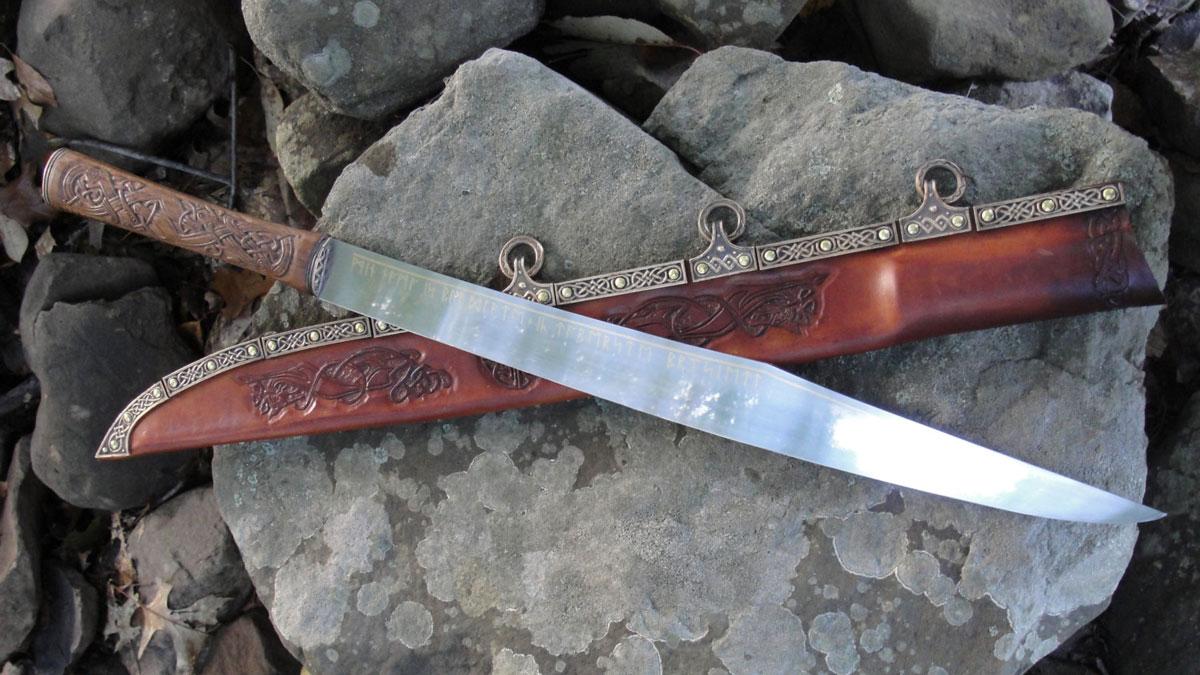 Blodlaetere is a broken-back seax an Anglo-Saxon warrior might have used to wreak havoc during the Viking Age. And knifemaker Matthew Berry has spared no detail in his hand forging of both its 19-1/4" blade, and the nearly 8" handle comprising the remainder of the sword's 28" length. He enlisted 1/4" of 1075 carbon steel for the Blodlaetere blade, polished it down to 600 grit, and--check it--inlaid runes by hand on either side. Rather than using a surface treatment, Berry carved away the blade's steal to form his characters, and then filled them with copper alloy wire that gives the appearance of 18K gold. Runes represent Berry's best Old English translation of: "My Name is Blodlaetere. I burst asunder mail. I rend flesh. MHB made me."

Continuing the carving quest, the Blodlaetere handle comes from black walnut and has 5 coats of Waterlox and 2 coats of renaissance wax protecting it. The design is a Celtic pattern of two intertwined dogs, and the guard a lost wax bronze casting of Berry's own design. The seax's pommel is also a lost wax casting with a pattern from a Viking brooch found in Ireland.

Also included with the sword's purchase is a 8 - 10-ounce top quality tooling leather sheath that has been wet-formed to the blade. It too is embossed with Norse/Celtic designs Berry found in a Dover book. The leather is beeswax-infused to give it structure and make it largely waterproof. Twenty fittings cover the sheath, all hand-cast lost wax bronzes that Berry has also designed himself.

It's about time I had a Sword House Key, given the number of sword fights with locks I've had in my life. In fact, just two weeks ago I was testing out the lock and key on my new nightstand - yep the top drawer came with...