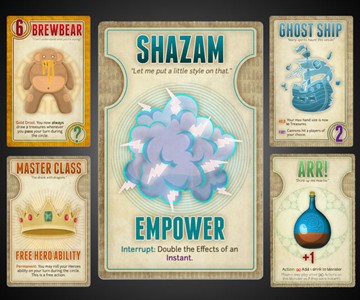 As follow-up to a highly successful Kickstarter campaign and production run, the drinking/magic card game DrunkQuest has launched its first expansion: The 90 Proof Seas. In case you missed our feature on the original game, here's a quick synopsis:

DrunkQuest is Dungeons & Dragons for the boozin' 21+ crowd. DrunkQuest combines fast-paced card game mechanics with shades of the D&D fantasy world with a few 6-packs and a liter or two of Captain Morgan for a party game of competitive entertainment and epic inebriation. Creators Jasn Painter and Athena Cagle of Loot Corps have heard playtesters describe DrunkQuest as "Munchkin with booze", and advocate the portrayal. They designed the liquor-laden saga with straightforward rules and magic cards that are easy to understand, so that anyone--even those who begin the Drunk before the Quest part--can pick up and get in on the action in minutes.

DrunkQuest's journey into 90 Proof Seas territory adds a few series of new cards that will deepen the paths both to strategic victory and End of Days intoxication. Additions include:

DrunkQuest: The 90 Proof Seas seeks Kickstarter funding through June 1, 2013. A variety of backer options are available, both for those who have the original game, and for the those whose interest has been piqued and are looking to acquire it.