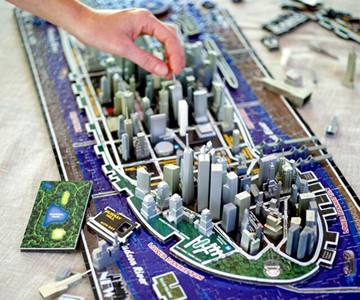 The 4th dimension is time. 4D puzzles of famous skylines - including Westeros from Game of Thrones - sprawl width- and lengthwise, rise vertically with scale-model buildings, and cap their dimensional empire with the axis of time. The New York model, for example, reflects 101 years of architectural history with plastic building replicas depicting the city as it appeared as far back as 1812, forward to 1971, when the World Trade Towers were built, and up to 2013's erection of the Freedom Tower.

Cityscape puzzles each begin with a traditional 2D jigsaw puzzle to form the city's street layout and geography. Buildings, which also require assembly, then fit into pre-cut holes in the puzzle pieces. In the Game of Thrones version, the puzzle base guides players through 1,000 pieces of Westeros region compilation, followed by another 200+ pieces of textured landscape. The puzzles' third layer adds 3D miniatures of the land's most famous cities and castles, including King's Landing, Winterfell, The Eyrie, and the Wall. If you record yourself along the way, and don't F it up, accelerated playback of putting this puzzle together should look exactly like the TV series' opening credits.

My wife has never been a fan of escape rooms. She says they make her nervous. (The truth: she just hates group projects, or collaborating with other people on anything, in any capacity whatsoever.) However. I believe...

Oh, Dad. You're such a sage. A simultaneous student and master of life. Willing pawn of the golf course, declared slave to the fishing pole. A magnate at the office, a maestro on the grill. Cigar aficionado, connoisseur...

Talk about usable art. Justin Nevins' Cryptex Security Boxes might be the most compelling pieces of Keep Your Mitts Off My Stuff I've seen all year. Tactical shelving and hidden doors include

Look, it's Marilyn Monroe! No, wait, it's Andy Warhol! No wait, it's a super disturbing mashup of the two because I put my WoodfloW double-sided kinetic wood puzzle together wrong!...