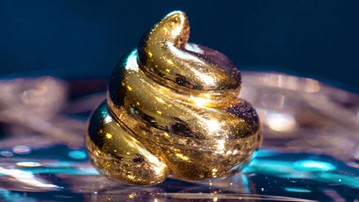 All that glitters isn't gold - but it might be some strange or unique product painted in the color's shiny finish. My golden ticket to making it into this listing isn't just going big, it's going big and gold. Sometimes obnoxiously so. Everything else can go home.

At least until I compile my Silver Wonders, Black List, and Rainbow Collection.

Enjoy this handful of strange and unique products in gold.

I'd take a Golden Douchebag Trophy as a gift, I don't care. Then I could just re-gift it to one of the dozens of people I consider as golden of a douchebag as my gift giver considers me.

And you know how some offices have a gnome or el lame-o desktop animal that floats around, mysteriously appearing on the desk of a co-worker the giver thinks has done an especially good job? Well I vote to introduce the Golden Douchebag trophy into that mix too. As an award for the ones who F up their spreadsheets and make everyone have to work late, or steal my chocolate milk out of the staff fridge.

Holy Willy Wonka golden goose egg, Batman! Want to go for a sauna? Come on, you gotta be sore - and cold! - from battling Mr. Freeze and ziplining 700 yards on one arm back to the Batcave!

A Golden Snitch fidget spinner for all the antsy, anxious, stressed, and spectral Harry Potter fans out there. Add a pair of wings to a copper hub, and you've got your very own Quidditch game for one. Well, more like Fidgetitch. Fidditch?

And you know what they say: a Golden Snitch fidget spinner in the hand is worth 2 hours and 54 minutes of watching Harry Potter and the Chamber of Secrets for the 14th time with your kids.

It may still stink, but ingest a couple of these 24K capsules, and your shit will look as handsome as a pile of gold. Tobias Wong and J.A.R.K. (Ju$t Another Rich Kid) created the Gold Pills as part of their INDULGENCE line, and as a bit of swallowable commentary on society's obsession with wealth and consumption. Just down one of the gold leaf-filled tubes (preferably with a shot of espresso and a couple prunes) and transform your insides into a rich and luminous palace of major systems and organs, all churning in perfect synchronicity towards a singular goal: making your shit sparkle.

In what looks to be a groundbreaking collaboration between DJ Khaled and Leisure Suit Larry, 24K Gold rolling papers aim to lavish even more luxury and class onto the process of getting high, polishing off a 16" Meat Lovers deep dish solo, and taking a 90-minute snooze on the floor with my buddy's Australian cattle dog at 3 in the afternoon. Shine puts in best when they say, "24K Gold creates the ultimate party atmosphere."

Nano-b Charcoal & Gold Toothbrush bristles have been infused with real charcoal and gold dust, not just because that sounds cool, but also because bamboo charcoal pull toxins and impurities from the surface of your teeth as you brush, and gold nano-particles kill bacteria in your mouth, as well as on the toothbrush itself. That means Nano-b will help prevent bacterial growth when your brush is a sitting duck - in the bathroom, in hotels, in transit during travels - as well as wipe out the culprits of bad breath as it swims around your tongue and gums.

Casio is celebrating 35 years of G-Shock this year. And while they still have 15 more to go to reach their golden anniversary, they've decided to commemorate the beloved watch line with a special edition G-Shock Glacier Gold collection.

There are 4 different G-Shock watches in the Glacier Gold roundup, all based on previous watch models, but spiffed up with (birthday suit appropriate) translucent jelly bands and cover, and golden cases and faces. The listing here focuses on the original G-Shock's Glacier Gold take.

In conceiving their one-handed Champagne gun, Bubbly Blaster must have asked themselves, "What would Han do?" Or maybe they saw if Industries' Han Solo DL-44 Blaster Flask prototype, and decided they could do one better than a flask. And a prototype.

So now we have the Bubbly Blaster, a party-ready shooter of the Champagne that requires just one hand and one 750mL bottle of your favorite sparkling wine.

Life testing your limits? KCUF it and expand them to 9' of 550-pound US Military paracord in seconds. The breaking strength can assist with anything from tying down your gear during a windstorm to tying up the bad guys during a shitstorm. Maker Alpha Rebel also approves of using of KCUFs to "get creative" with your girlfriend, and will replace the cord for life no matter how or how many times you disengage it from the bracelet hardware for survivalist or James Bond(age) activities.

Alpha Rebel makes KCUFs (pronounced "cuffs") for men who want to be at the ready without looking like they work at the local outdoors superstore. This bracelet comes coiled and latched with 24K gold-plated bracelet hardware. The cords' all-weather nylon construction has MIL-C 5040 certification and is resistant to mold, mildew, stains, and discoloration.

Shine and its 24K Gold rolling papers add a new action to the ever-growing list of Things You Can Do with Gold. Currently populated by: 1) Eat it; 2) Shit it; and 3) Buy expensive things with it. Stoners and recreational...

Hot Chocolate Design names their winged, golden Mary Jane-style pumps "Pegasus," and, ladies, I can certainly see the appeal of going to your New Year's Eve party dressed as a mythical horse. But Pegasus doesn't have...

This $2 bill is worth its weight in gold! ... Which is still about $2. At least in terms of its legal tender value, despite being layered in 22K gold. Of course, you'll pay many times that for a chance to own the 22K...

Holy Willy Wonka golden goose egg, Batman! Want to go for a sauna? Come on, you gotta be sore--and cold!--from battling Mr. Freeze and ziplining 700 yards on one arm back to the Batcave!...

I wonder if Outshine Designs got the idea for their Revolver Ring from Looney Tunes or one of those superhero movies where some poor sap tries to point a gun at the wrong Super Strong Man, and he takes it and bends it...