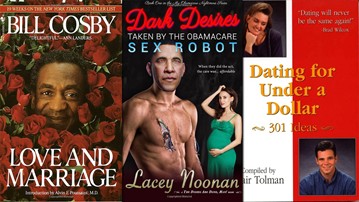 No, smug smarty pants, I haven't read every book ever written, so I can't say with absolute authority that these are the 10 worst books ever written. But I, along with hundreds of your peers reviewing them on fine online marketplaces, know these novels, novellas, how-tos, and pieces of chick lit, teen lit, and trash fiction, are bad. Calling their writers novelists, authors, or in some cases, humans who know words is generous.

With the exception of #10, which is one of my favorites, and included on this list of the 10 worst books ever written only because of what the Russians my fiancee is giving me to list it.

Note: Bad novel and book prices are listed as they were at printing. Prices are subject to change.

The first(?!?!) in the Rob Gronkowski erotica series. E L James move over. And for that matter, Twain, Hemmingway, and Fitzgerald as well. Lacey Noonan has firmly cemented her place on the Mount Rushmore of great American authors with this tour de force.

Leaving the easy "tight end" innuendo for writers that pluck the lower hanging fruit, Noonan's seamlessly woven footballisms like the "Gronk Spike" make reading this rollicking sexual fantasy with one hand an afterthought. Rather, readers will find themselves so immersed in her poetic prose as our modern-caveman-cum-Patriot drives a spike between the lead lusting female Leigh and her husband that they'll be unable to use the delicate flick of their fingertips for anything more than turning pages.

A Gronking to Remember goes deep and scores on so many levels. Whether you're a Patriots fan, a lover of Noonan's past works, or just a fan of penetrating words, you're sure to come away from this read needing a long soak in a cold tub.

One can only hope for horizontal followups in the series such as, Le'veon Rings My Bell, Menage a Trois with the Mannings, A Rodgering from Aaron, and Tony Gets Romosexual.

You'll have to read the book to see if Tom Brady shows up for one of his trademark Brady ass slaps.

Dating for Under a Dollar: 301 Ideas

Blair Tolman wrote Dating for Under a Dollar because he's cheap, and figures you might be too. Come on, let's not mince words here. You can dress it up as "a book for teenagers, young adults, youth leaders, or anyone looking for creative dates that don't cost a lot of money," but if you're looking for a creative date that doesn't cost a lot of money, it's because you're cheap.

One reviewer mentions Dating for Under a Dollar is "The perfect book...if your [sic] interested in dating second graders," which adds a whole new disturbing level to its contents.

Curious about the specifics of Tolman's suggestions? They include mostly group games and getting-to-know-you activities. Example: Circle Squishing. A group of people tests how small of a circle they can smash into. Equipment needed: masking tape. Cost: Ha! I don't see any rolls online for under $3! This book isn't just dumb, it's also a scam!

The No Cussing Club

Fuck this book. It's not some cheesy novel trying to get little kids never to say 4-letter words, it's the retelling of a true story, written by the 14-year-old, McKay Hatch, who lived it. Apparently he was bullied and cyberbullied for telling his friends and others not to cuss. This led to his starting a No Cussing Club at his high school, which - according to legend - amassed over 20,000 members in every state and more than 30 countries.

All of this sounds...sort of OK. Weird, but not worst book ever territory. However, as one reviewer put it, after reading it, "My soul vomited." People say it's a poorly written advertisement for censorship, which the kid and his family will gladly collect the profits from to buy overalls and afghans. Or whatever people who don't cuss like to buy.

I always wonder about the person - the real person - behind the photographs we ridicule, turn into memes, or put on the cover of trashy dime store novels. Where is this strapping, goldi-locked "Timothy" today?

Wait, what?! The Topping Timothy blurb says they do! It gives away the book's whole plot and ending in the 5-line description! What a crock. I hope someone gets a ball gag for this fail....

Dark Desires shows how the worlds of a couple just trying to make good is upheaved and thrown into chaos by President Obama's Affordable Care Act. Its death panels. Its enforced premiums. Its sex robots.

Holly and Brad want no part of this sexy cyborg special delivery sent by the government to help them blow off their conservative steam, but one thing leads to another and...I won't ruin the rest for you.

If you've already read and loved Dark Desires, Noonan's follow-up, The Blacker the Robot the Moister the Oyster is also available in both paperback and e-book.

Possibly the 3 Wolf Moon Shirt of Amazon book reviews. Dale M. Courtney's Moon People has a high-ish 4-star rating, but enthusiastic descriptions of reading it as a "once-in-a-lifetime experience" and the book itself as a "paragon of literary excellence" might maybe shouldn't be taken literally.

In case you're interested in more, the plot of Moon People is about people living on the moon.

ANTIGUA: The Land of Fairies, Wizards and Heroes

Rats! Larry and Denise Brown Ellis' killer fantasy was only available on Kindle at printing. So those hoping to hang on to a hard copy of ANTIGUA: The Land of Fairies, Wizards and Heroes forever, I'm afraid you're out of fairies, wizards, and heroes.

This 2-star novels follows the adventures of the Land of Antigua's citizens, who spend most of their days enduring the threats and wrath of the Evil Sorceress Gwendeviere and the Great Dragon Vorltrarr. The citizens include kings, gnomes, wizards, centaurs, and knights - all the good characters Tolkien would use but, apparently, without any of the thoughtful plot lines or writing talent. Enjoy!

First published in 1981, the radically strange and unparalleled Codex Seraphinianus took Italian architect, illustrator, and industrial designer Luigi Serafini 2-1/2 years to complete. What is it? Aside from floating in the general sphere of "art" no one really knows. Four hundred pages, eighty bucks, and no one knows what this book even is or means!

You say, "Too soon!" I say, "Not soon enough!" Cosby wrote a ton of books before he was banished from pop culture, and at least one of them, Fatherhood, was a bestseller, and even though she denies it now, I know my mama owned it.

I'm only including Chad Kultgen's triumphant encapsulation of manhood on this list because my fiancee asked me to, and then promised a verrrrry special thank you in return. She-Ra: Princess of Power despises this novel. Probably because it's too accurate, too real, and too open about all man things women try not to see or believe.

In my own opinion, The Average American Male is a winner. Maybe not one of the best books ever, but funny, obnoxious, and dirty. Very, very dirty.

How to Fix Stuff: Practical Hacks

At first I thought Tom Scalisi and Tanya Watson wrote How to Fix Stuff: Practical Hacks for Your Home and Garden as a go-to for kids who need an easy gift for Dad or gift for Mom. But now I wonder if it isn't the opposite...

S**t Happens So Get Over It

Shit Happens So Get Over It. Is the title not inspiration enough? I'm not sure I even need to read beyond the cover to figure out that this book would like me to suck it up. And rightly so. Times are tough. We could all...