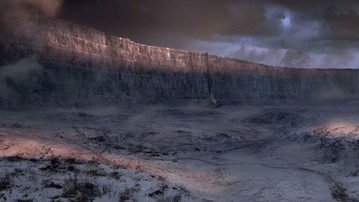 The topic of digging tunnels and scaling walls has come up a lot lately in my house. The reason why being obvious: it's Dry January. Taking a hiatus from alcohol has left my wife and me extremely bored. We'll talk about anything with an uncontroversial ABV of 0, any topic that doesn't remind us of Jose Cuervo, Jack Daniels, and Stolichnaya.

I remember sharing ideas for digging a hole to China and scaling the Empire State Building like King Kong did made for popular recess banter when I was a kid. And, admittedly, when I was a bored yout' in elementary school, I tried some version of both at least once.

So now that I'm a GAM (grown ass man) with some sobering time on my hands, I figure, why not explore the possibilities a little further?

Most of the following items are in-the-act assistants, but I also believe that if you're digging, you gotta have the physical strength and endurance for the long haul, and if you're climbing, you gotta have the physical strength and speed for the quick up-and-over. So the first few products are fitness tools, most specializing in hand and upper body strength, plus some core builders thrown in for added power and support. And so that you look ripped when someone records your big dig or big climb for YouTube and cable news.

Here are my picks for the best products to dig tunnels & scale walls.

For discreet grip training. No one will ever guess you're going to parlay using that clever coffee mug into a massive feat of strength and escape. Even, thanks to the prevalence of coffee fiends, if your regimen requires you drink a dozen cups of the sludge a day.

Planet Waves says its Varigrip is the "perfect tool for pre-show warm-ups and maintaining conditioning when away from your instrument." So in addition to firming up your finger muscles for gripping shovels, swinging sledges, and scaling walls it will totally help you give yourself (or someone else, ladies) better hand jobs.

Feel like you're about to hit a wall with your fitness regimen? The Doorway Fitness Tower is a next-level pull-up bar that brings over 70 exercises to the entrance to your bedroom, living room, or home gym.

In addition to its overhead pull-up / chin-up bar, the Doorway Fitness Tower extends down to incorporate a dip station and bars for additional ab and leg work. That bottom half also swings forward for horizontal exercises, such as pushups, supine pull-ups, planks, and ab roll-out style moves. The DFT's various holding and balance points can also help with post-workout stretching.

Hopefully you're not accumulating tunnel-digging tools and honing your tunnel-digging skills to dig yourself out of the apocalypse...but if you are, hey, the Apocalypse Shovel is doubly good for you.

It's also handy for burying 2018 (so are these tips for how to get rid of the year's bad juju.)

Mykel Hawke's Apocalypse Shovel will help you whack, impale, and chop it up on its way into the ground too. A super rugged survivalist's multi-tool, the Apocalypse Shovel incorporates a fixed blade knife with plain edge and serrated spine, a pick, axe, compass, glass breaker, and bow drill divot hole into a knurled steel handle and shovel head made with two different grades of hardened stainless steel. Like the knife, the shovel head also doubles up with a serrated edge on one side and sharpened edge on the other. The shovel assembly breaks down and stores in an included hi-tensile nylon pouch when not in use.

If you really want a full barrier shutdown, Bertha's your girl. She recently dug a 2-mile tunnel underground in Seattle to replace an existing viaduct city officials determined itself would end up underground if a major earthquake hit.

Bertha doesn't come cheap, though, as Seattle found when it paid for the custom design and construction of Bertha, her services, plus a 2-year delay in boring and repairs after she sustained an injury caused, invariably, by some lazy and inept person who F'd up by leaving an 8"-diameter, 119'-long metal pipe in the poor girl's tunneling path.

Somewhere in between a 70-dollar shovel and a billion-dollar tunnel-boring machine is a CAT Excavator. Available in lots of styles and capabilities to suit the precise job you need it for. And, as always, each dirt-mover comes in CAT's trademark bright yellow. And that is some bright yellow. Definitely brighter than orange.

What are the chances of finding a ladder tall enough to take you to the top of a huge, imposing 30' wall? Pretty good if you've got an Amazon account. This Louisville Ladder extends all the way up to 40', and even if you need to go, say, another 15' to get to the top, the rungs of this 300-pound-capacity climbing buddy will give you a terrific boost.

Now, for getting down the other side. Well you could rig the ladder on some sort of pulley system you install to hoist it up and over from the top of the wall, but your leverage from that position could be questionable, depending on the wall's thickness. I'd recommend ditching the ladder on side #1, and rappelling down side #2 with one of the following.

Cyfie Grappling Hook & Rope uses include anchoring, fishing, rescue vehicle traction, and rappelling down the side of wall that's too high for jumping. Even when your friend Cornelius eggs you on, saying 30' (or 55') isn't that far of a drop.

The toothy 4-claw hook folds down when not in use, and can support a theoretical load of 750 pounds. If you're going to test that out, I recommend a horizontal pull load rather than a vertical pull / suspend one.

Let's say, for the sake of argument, that this wall you needed to scale and then rappel down were a little taller than you expected. Like, uh 24 stories taller. The SkySaver is more of a portable high-rise fire escape...in a backpack...than a rock climbers rappelling mechanism. It consists of a fire-resistant cable wound around a fixed metal reel, both secured...in a backpack.

Backpack straps unfold to form a complete chest / crotch harness with a load capacity of 66 to 300 pounds. You can select cable lengths of 80', 160', or 260', depending on your particular wall's height.

Not exactly sure what kind of wall the universe will require you to scale? Will it be concrete? Steel? Chain link? Ice?! Hey, what about glass? Best train for everything. And best train for glass first because it looks like the most fun!

Now let's say you start with the dig-a-tunnel approach, but about 3 feet in get tired or fed up with it, and just want to kick back with a cold beer. Don't let your hard work go to waste! Turn your tunnel into an eCool natural drink cooler.

The 44-1/2" eCool utilizes insulating subsurface temperatures to maintain up to 24 cans of beer or sodie chilled and pleasing to the sip. Its hand crank and rotating belt configuration requires no electricity for cooler use.

These Touch-Up Paint Pens, fillable wands with brush ends for quickly painting over wall / ceiling / door / furniture scratches, patches, stains, and repairs, are made by the brand Slobproof. And, if the name is accurate...

Bring the Nolanverse to your living room with a set of Dark Knight bookshelves. Made to order. Just beam your Bat-Signal into the sky and designer Fahmi Sani will get to work erecting a set of webbed-winged night stalkers...

Socket Blockers are domed adhesive covers for outlets and light switches that protect electrical components from getting clogged with paint and debris when you're sprucing up your wall color or doing drywall work. It...