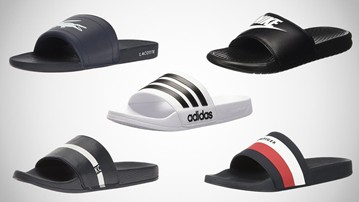 The best men's slides are boxed and ready to walk you right into summer. Right 'round the beach and pool. Right down the street on a beer run free of wool socks and a down jacket. And, oh yeah, right into the fetid shower at the gym.

Slide season is coming, and these sandals are some of the best the men's slide breed has to offer. And speaking of "men's," while traditionally classified as men's footwear, reviews suggest many women are eager to get their slides on too, preferring the no-frills sandals to both their flip flops, and their fuzzy, rugged, and glass slippers.

Here are my picks for the best men's slides.

Note: Sandal prices are listed as they were at printing. Prices are subject to change.

Say, "Later, gator" to the Ug Fest that is Crocs and choose the more sporty and stylin' reptile in Lacoste's Frasier Slides. The sandals' silhouette stays true to the brand's signature style, plus enhances the casual footwear with a crocodile skin effect on the footbed.

Nike seemingly gives their Benassi Solarsoft Slides' uppers and footbeds the textured, animal-skin treatment just like Lacoste. These shoes look like they're trying to emulate lizard skin to me, but NIKE simply calls it "fractal designs," and says they increase comfort along with style.

Benassi bottoms are built for traction, with a pattern and flex grooves intended to provide a natural range of motion.

The Duramo Slide Sandal is an all-synthetic shoe made of lightweight EVA. It has a textured footbed with a soft outsole to give your feet cushioned steps on the way to, and then back home after the game.

With the Performance Adilette SC+ adidas adds more contouring and introduces some rich suede fabric to the upper of its otherwise casual shoe. They also have a Supercloud Plus PU footbed for extra cush.

adidas' striped Adilette slides are what I think of when I think of slides. I don't know if they're the original slides, but the Adilettes have been around since 1972, so they're definitely a classic. The shoes also remain both very popular and very well reviewed.

The Adilette has a soft, quick-dry lining and a PU-coated band.

According to adidas, "Original is never finished." So it goes with their Adilette line of slides, still going strong in both its OG and contemporary iterations. The Neo CF version has a more tightly woven upper, with embossed synthetic stripes. It also adds a suede sole, and runs a big ol' adidas announcement along the sides, in case anyone who sees you in the sandals didn't already know.

I gotta say, I do not like these shoes. I do not like this brand. I would score a 2 out of 10 when it comes to knowledge of what's fashionable, but even I know Crocs are hideous. Their original, full-coverage mule shoes, and also these Citilane Roka Slides. One good thing about them though is they're pretty cheap. And you'll never have to worry about someone stealing them if you leave them on your beach towel or forget them in a locker at the gym.

These slides Swoosh! in with a Phylon foam sole and one-piece synthetic leather strap that makes them seem a little nicer than your plastic-looking EVA shoes. The strap also has a jersey lining for softness, and to absorb the foot sweat you might experience wearing a pair of Benassi Just Do Its - gotta say, they look kinda hot.

Leave it to Ralphie to take a pair of shower sandals and make them look cocktail party-ready. You might even be able to get away with wearing the Polo Cayson Slides to a summer wedding. And definitely a summer funeral.

These slides are cool because they have a beast of the mountains on them. Rrrrawwwrrr! PUMA!

They're also a good choice for men who like Brazil, and by Brazil I mean Brazilian supermodels. And maybe the Brazil national football team. The San Paulo slides give a nod to the Brazilian city in both name and color.

The slides' contoured footbed is topped with an embossed textile webbing strap.

A touch of adidas meets a touch of Tommy meets please don't touch anyone at the pool or in the shower whether you're wearing these touchy slides or not.

Kenneth Cole brings in another textured slide - the "pebble pattern" - with his Big Screen sandals. Their bandage's contrasting center stripe features the initials "KC," and, yes, I definitely think if you get these slides you should also get a Sharpie and draw a carrot with an "F" in between them.

I like the sound of Massage Bubble Slides. But, come on, these are clearly Epcot Center Clogs. And the brown versions of the EVA foam footwear are Ballpark Peanut Sandals. And the pink ones? Lychee Slippers...

When I say GUDO's flip-flops have footprints embossed in their soles, what I really mean is the summer sandals will leave behind marks in the sand that look like a human mated with, like, a palm tree. Or maybe a nice...

Welcome to the shoepocalypse. Crocs has teamed up with Japanese fashion brand BEAMS - again, apparently - to bring you, me, and the whole ugly-plastic-shoe-loving world the Crocs x BEAMS Bespoke Classic All Terrain Clog...

Before I slip my foot right into Barf! These KISEE-DSV Sandals are uglier than my Aunt Jan's gnarled-toe, callous-covered Sasquatch feet, I should qualify them: KISEE-DSVs are a performance sandal collaboration between...