The Best Gifts I've Ever Given My Wife 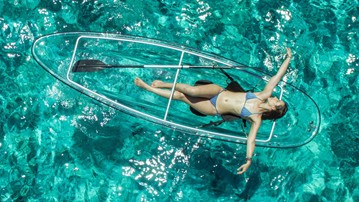 Per my wife. Mostly. Though I admit, some of the best gifts I've ever given my wife have brought me some pleasure too. One or two could even be considered a little self-serving. And, fine, at least one gift I know She-Ra: Princess of Power hates, but I frikkin' love it, and use it all the time. One of those gifts for your wife that just keeps on giving, you know?

So from grand to simple, sweet to slightly selfish, and thoughtful to might've-slept-on-the-couch-that night, here are the best gifts I've ever given my wife.

Love is Art - Roll in the Hay Paint Kit

The Love Is Art Canvas and Paint Kit went over surprisingly well. Maybe because the tag line for Jeremy Brown's F'n'paint idea is "Abstract Art Through Intimacy." My wife really likes both the terms "abstract art" and "intimacy."

I also think she likes the naughty inside joke we now share above the couch in the living room. Especially when people ask where we got it.

Love Is Art sets include a large plastic sheet couples lay out on a flat surface, and top with a specially treated non-allergenic white cotton canvas. A 4-ounce bottle of black, non-toxic, washable paint dotted or streaked on the canvas, and then spread about in the most delightful of ways creates your finished metaphysical masterpiece. No skills...uh...no painting skills required.

My wife doesn't despise Star Wars like some of her friends, and my Worse Than the Dark Side ex-girlfriend Karen, and she quite likes her some Princess Leia buns, so these nice pillowcases with the famous Leia / Han Solo "I love you," "I know" quotes from The Empire Strikes Back were received very well, especially as a housewarming gift gift when we moved in together.

Yes, those of you who have been around here for a while know, by moved in together I mean when I moved out of my mama's house and into She-Ra: Princess of Power's condo.

My wife didn't come right out and ask for The Womanizer...she just made crescendoing whimpers into exasperated sighs until I figured it out myself.

Rumpl is her favorite puffy coat and her best sleeping bag turned into a comforter for her bed. And the couch when it's 71 degrees in the condo and she's cold.

Rumpl's is a blanket for your nights under the stars, or a cover for your movie dates in the living room. It's a high performance insulator made from 20D Ripstop Nylon with DWR shield. In other words, it's a Blanket of Champions that my wife adores, and almost never shares with me.

Shoulda sprung for the 2-person version.

I prefer to call this decanter the "Flip-It" Wine Aerator, and I call it that a lot because I talk about it a lot because it is the one gift I've given my wife that she loves so much and uses so often, but not only never mentioned or hinted at wanting , but had never even heard of before I wrapped it up for her birthday last year. I've gotten so many kisses for this one.

Only on the face, but still.

A decanter in shape - and in function if you choose to use it that way - the Winebreather distinguishes itself with a bottle-neck-hugging top lined with an accordion of water(wine)tight rubber. Place the nozzle over the mouth of an open bottle of wine to create a seal, and then Flip-It! The wine pours from the bottle to the carafe, aerating it along the way.

Where It Happened Map Jewelry

The Maps jewelry collection from A. Jaffe could make your wife feel very, very special. Select any address in the world - the place you met, went on vacation, got engaged, ate the best tacos of your life - and A. Jaffe will print it as a map with a diamond marking the sweet spot on you choice of necklace, ring, bracelet, or charm.

Maps of where "it" happened are engraved into either sterling silver or 14K gold plates in various shapes and colors. You can also get a little crustier than the single diamond at your address, and add a frame of them around a few of the necklace and ring styles, accounting for the pieces' giant price range.

The crazy thing about this thing is I didn't even buy it for my wife. I think I ended up with it after some white elephant gift exchange at work, and figured, what better to do with a brand new slice-it-thin slicer at Christmastime than wrap it up and re-gift it to my wife.

I don't think a week has gone by in the past year-and-a-half that she hasn't used it. She loves her some handheld mandoline-ing action. Radishes, fennel, peppers, zucchini, onion, even the odd fingernail and hunk of skin based on the sounds and swears I hear her make sometimes. The ceramic edge means it stays sharp and sturdy too. What a find.

Thanks, Janet from HR.

Dude, I know. It was so expensive. The most expensive gift I ever bought anyone. Probably more expensive than all the gifts I bought everyone combined for every Christmas leading up to the one I went all-out John McClane Yippee-kayak-ki-yay, mother fucker on.

But oh did she freak when she opened it. A view of all the flora and fishies below the boat? A tandem model so I can do all of the work? Yeah. Winner, winner, salmon dinner.

You might think a men's back shaver was one of the self-serving gifts I once gave my wife, but even though I used (and continue to use) it, the BaKblade was all for her. When she opened it her face lit up so bright I had to double check I didn't accidentally give her the diamond necklace I bought for my mistress.

But to She-Ra: Princess of Power, a tool for ridding her husband of his patchy thatches of back body growth may as well have come straight from Tiffany.

Oh yeah. I like to call the Peeping Creeper the Random Wednesday Night Gift 2014. As you might imagine, my wife didn't like it much when I first gave it to her.

Didn't like it the second, third, or eleventh time I gave it to her either.

I think she finally came around a couple years later, though, when she brought it in her suitcase on our road trip to the Oregon coast, and suction cupped it to the bedroom window of our Air B&B. Right before we went to bed she asked me to open the drapes and crack open the slider a few inches.

Why Are We Not Having Sex Right Now? Neon Sign

Cover hog! Sheet stealer! Person who is shivering cold when I am sweating through the bedding! Splitz Bedding is a solution for couples who can't get their sheet - or blanket - together in bed...

Why I Must Have Sex with You Checklist

Hmmm. Not sure if a Why I Must Have Sex with You Checklist clears the meter o' political correctness these days, especially since it's presented as a notepad that would sit perfectly on one's desk at the office. The requests...

Valentine's Day Gifts for Her