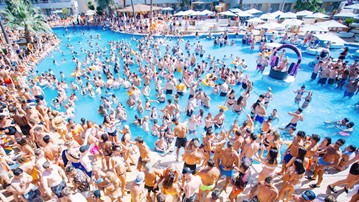 My guide to your most splashalicous pool party supplies starts with essentials for a bash at the swimming pool, extends to a shindig at the lake, and finishes up with a shebang in the backyard hot tub. From floats to snacks, speakers to a charcoal grill made out of a trash can, read on to discover the pool party supplies that will best complement your summer strokin'.

Note: Pool party supplies' prices are approximate, and listed as they were at printing. Prices are subject to change.

Save a horse, ride a pool toy. The Inflat-A-Bull might be the most clever - and scariest; check out the photo-realistic print on that toro's face! - pool toy I've ever seen. And he's here to buck you right into your pool party. Lather up his hide up with some Hawaiian Tropic tanning oil, get a few friends Corneliuses to agitate the raft's handles, and you can even run a makeshift mechanical bull ride in the water.

Sure, they're cheesy as hell, and obviously look like giant adult diapers, but what's a little kitsch and kiddie pants when it comes to not drowning because you're drunker than Cooter Brown? Or, more importantly, when it comes to being able to float hands-free, thereby freeing up space to double-fist it in the middle of the deep end?

Where noodles and saddles fail, dumping you off at the slightest perturbance, Floaty Pants hug tight - but comfortably! - around your hips and crotch to keep you upright and solid in the water. You won't need to tread or hold on, and Floaty Pants' posterior extension will even serve as a back rest primed to lean 'n' chill.

Just be careful those hulking hands don't squish your drink right out of the cup. Jokel makes their unbreakable pints out of silicone to eliminate the shattered glass party foul, but it's possible they're just replacing beer bombs and flying shrapnel with beer geysers to the face.

Still, the glasses are lightweight and flexible enough to stash in a bag and take along on trips to the park, pool, or beach. And they're handy to have when you want to partake in a pint in places that don't allow glass containers. Unlike plastic party cups, Jokel's silicone glasses are reusable, as well as dishwasher-safe and freezer-safe for chilling. They can actually sustain temperatures of -46 all the way to 460 degrees F without cracking or melting.

This is the original Beach Glass. A nice 12-ounce globe ready to bear down, bob around, and help you get your wino on. The glass is made of BPA-free acrylic, which Beach Glass touts as much lighter and stronger than glass. While Beach Glasses are shatterproof, they can break, but if they do, it's more like a few large chunks to clean up, rather than an explosion of tiny shards.

You'll need some pit master skills to conquer the Po' Man Charcoal Grill, but if you're feeding a big pool party crowd, this can has you covered. Its creators say, "It looks like a trash can and tastes better than an Egg, so it will be the conversation piece of your next BBQ." The grill sets up just by setting it down on the ground, and operates on plain charcoal and rubbing alcohol.

I guess the saying rings true again: one man's trash is another man's treasure.

This cooler keeps the pool party lit up all night long courtesy of LiddUp technology, a through-ice LED lighting system. Adding nighttime visibility during drink selection and a moody-smooth glow through the cold, LiddUp takes this Igloo from mere ice chest to full-on Party Bar.

At a pretty decent price for a commercial-style blender, the Ninja will kick your party guests in the face with its smooth-blended, ice-chunk-free frozen margaritas, daiquiris, and - if you must - frose. (That's fro-zay. I don't do French accents.)

Cold as ice...and watered down as George Carlin doing standup at Sunday Mass. Not the best combination when you're serving and drinking beverages. The BrewTender is an 80-ounce drink dispenser sized for the tabletop and fitted with an internal, isolated vertical column for ice. So everyone's beer, margarita, or sodie stays cold without compromising taste, and you as party host don't have to spend the whole evening making trips back and forth to the fridge.

What a crock of sh...azam! Piping-all-night dips, steaming appetizers, even hot roasts in waiting. Crock-Pot has always made cooking for a crowd easier, and now I see they've heightened hosting efforts too with these Hook Up Connectable Entertaining Systems.

Each unit has a rectangular heating base that houses either two 1-quart crocks, a single 2-quart, or a single 3-1/2-quart crock. Fill the small ones with appetizers, dips, toppings, and finger foods, and the large one with anything up to entree or roast size. Each system has a retractable cord that either plugs into your power outlet, or into other Crock-Pots in the Hook Up line, so you can gang them together for a full halftime buffet of slow-cooked or kept-hot goodness.

Gangable Crock-Pot Entertaining Systems will keep your hot food hot, and this Inflatable Buffet & Salad Bar will keep your cold food cold. It's a pretty simple culinary raft, a 52" x 21" x 5" serving bar you'll huff and you'll puff to blow up, and then fill with ice and serving dishes for your guests' grubbing pleasure.

Though not the smallest of speakers, the G-BOOM is still portable and, with its rugged black case, stands sturdy during pool parties, tailgating, camping, and general outdoor use. Maker G-Project also points out the boombox's 2.2 speaker configuration and dual rear-firing bass ports render it "loud enough for your neighbors to hear - whether they like it or not."

The price is right for a party speaker too.

The SOUNDBOKS 2 is a much bigger speaker, and a much bigger splurge than the G-BOOM, but if you've got a lot of people hitting your back patio, maybe you need the current reigning Loudest Portable Speaker in your corner.

SOUNDBOKS 2 volume goes up to 119dB, and a range of 100 yards. Add to that Bluetooth compatibility, a 50-hour battery life, and, unlike the G-BOOM, heat-, wind-, and dust-resistance.

I mean, who says you need a full-on pool to have a pool party? Even in the summer a hot tub party is a hard invite to turn down.

The Softub makes things easy for you because, lightweight and portable, it goes where and does what you tell it to. Without lip and without draining your wallet.

A shot when it's hot from a nice piece of ice. The Ice Luge brings cool relief to scorching hot days and barrels of monkeys to the dudes who always start the Shots, shots, shots, shots! chant wherever they go out. Based on how you feel about that, at your own party you can reward their efforts with some fine Grey Goose Kamikazes, or straight-up rubbing alcohol.

Not the outdoor party prep chore I'm most stoked to do, but everyone who comes over, including me, is going to appreciate not leaving with 1100 mosquito bites as party favors. The Black Flag Fogger is an electric device loadable with up to 40 ounces of Blag Flag Fogging Insecticide. When plugged in it dispenses a 10' cone of odorless fog cooked up to clear mosquitos and biting flies from the vicinity instantly. The process takes minutes, and keeps the fogged area bug-free for several hours.

Now, can I hook this Hooli Pool Fountain up to my FUNBOY? No? Then, psssh, it will not put "the FUN in multi-FUNctional," as you claim, for this dude...

FUNBOY's calling these "Luxury Inflatable Kiddie Pools" is a bit of a misnomer. Clearly, with their fresh, funky, and sophisticated designs they're Luxury Inflatable Adultie Pools. For the next summer scorcher heading...