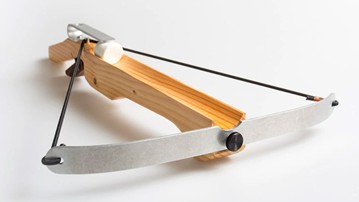 Mm-mm-mm, I've officially made it halfway through the alphabet in my series of gift guides that start with letters of the alphabet. Welcome to the letter M, and 21 gift ideas that make the most of this magnificent letter.

Note: All alphabet gifts are priced as they were at printing on November 22, 2022. Pricing, and availability, are subject to change.

Myerchin's Marlin Spike is too big to be a toothpick, too small to be a fire poker, too blunt to skewer me some kebabs...so what exactly is it? What the EDConundrum is a marlin spike?

Sailors, boaters, and survivalists amongst you will recognize this maritime tool, but for everyone else, a marlin spike is used for tasks such as untying knots, unlaying rope for splicing, and as a toggle to connect ropes under tension. Away from the sea, it's probably most handy for the first one, loosening knots you've tied around the house, outdoors, or while practicing with your PRO-KNOT Booklet.

Mystical Fire packets turn all wood-burning fires (the ones in your living room included) into a circus of colorful flames. Amazon reviewer CVTuckster suggests using more than one pouch at a time for larger fires, and notes they should be laid stably on a log, as functionality is dependent on their chemicals melting and adhering to the wood. He reports that rainbow light show effects last 15 to 20 minutes. Note: CVTuckster is only a Mystical Fire consumer, not an employee of the manufacturer, and could be lying or not know what he's talking about. But I believe everything he says because anyone named Tuckster has got to be a pimp.

What a piece of junk! Actually, I have no idea how well this Star Wars Millennium Falcon Wireless Charge Pad works, or how cool (or junky) it looks in person, but that felt like the right line from the film series to open with. Either that or, the Star Wars Millennium Falcon Wireless Charge Pad will have your phone juiced back up in point five past lightspeed. But of course, that sounds way less believable than the gimmicky qi charging ship being a piece of junk.

Matador has condensed a comfy, water-repellent, puncture-resistant, 55" x 44" blanket into a 4.8-ounce square small enough to, oh yeah, slide in your pocket. Taking an impromptu stroll on the beach with a girl who mentions she would also take an impromptu roll in the hay, if only you had a smooth and roomy respite from the sand for bodily crevice protection? Oh hey, Miss Queen of Brilliant Ideas, lookee what I just found in my pocket. A full-size blanket with lightly weighted corners for maximal coverage even on breezy nights!

And it's not even in the side you were asking about. That side's just happy to see you.

Professional knife thrower (how do I get that job?) John Bailey has designed this Mini Bo-Kri for Boker. Its overall length is 10-3/4", overall composition is 420J2 stainless steel, and overall aesthetic pretty much the best a knife can get when it comes to ratio of curviness to pointiness. The weapon world's equivalent of a busty blonde in stilettos.

Easily make medicinal butter, oils, tinctures, lotions, and sauces. Hear that? MagicalButter is so named for its power to convert healing herbs into healing herb culinary creations. So start coughing and breaking into a cold sweat. Then grab a bottle of Everclear and couple sticks of Land O' Lakes and check out the manual to see how feeling much, much better can be as easy as 1...2...weeeeed!

Mr. Stay Puft's got nothing on my Mallow Bow. Sure, he can stomp on people, toss cars, and tear down buildings, but I can dole out cavities, high blood sugar, and toothaches. Straight to the kisser from 60' away!

The MMX Marshmallow Crossbow is a handcrafted firing mechanism designed to shoot "fresh slightly dry regular sized marshmallows." Yes, that's right. Now you have a bitchin' application for that bag that went stale after you passed out from too much whiskey 'n' S'mores before sealing it back up. Marshmallow Bows are made from natural materials in Vancouver, BC.

Second only to my teeth - and probably preferred by the other people at the BBQ - these Claws from OXO shred meat with quickness, efficiency, and panache. Well, as much panache as an eagle's talons or a coupla garden rakes can muster, anyway.

Maybe "All-Thing" is a slight exaggeration. The magic Opener EXTREME won't open a corked wine bottle. Or a bag of chips. Or, ladies, his heart to you. But it will open a lot. Beer bottles, screw-top bottles, pull-tab food and sodie cans. All without breaking your nails, slicing your fingers, or forcing you to ask someone stronger to do it.

Remember Pretentious Beer Glasses? Well meet the next step up (or down, depending on how you view beer snobbery): Narcissistic Beer Glasses. Also known as The Monti Taste Collection. These 4 glasses have been designed and calibrated to deliver IPAs, Pilsners, pints, and 12-ounce bottles of Bud to your lips in the tastiest and showiest way possible. Use The Monti Taste Collection set to enhance the taste not only of your beer, but of the superiority you'll feel drinking it.

Mechanical Mouse Jiggler (So They Think You're Working)

This mechanical mouse jiggler is recommended by 5/5 slackers, underpaid employees, people out of PTO who need some TO, and dudes and ladies with a weird compulsion never to let their computers log off or go to sleep.

A base made to hold most standard-size mice, the mechanical mouse jiggler ensures your mouse stays active on your desktop or laptop even if you are not. According to maker Vaydeer, the sneaky gadget is undetectable by IT departments, so if your company is dictatorial about keeping tabs on its workers' working / non-working habits, your efforts to deceive them won't be discovered.

Where there's smoke, there's fire, but where there's juuust a little bit of smoke, hopefully there's a Micro Smoke Machine. Creator Wayne Berendhuysen of Wayne's Workshop calls his terrific handheld gadget the Costronica Pocket Smoke. Powered by 3 x AAA batteries, it can pump out the foggy ambience for all your wee cosplay, costume, photography, and Little Engine That Could endeavors.

mmmmmClassic. Nope, it's not the new Quizno's tagline, it's Marseille Inc.'s mClassic, a plug-and-play graphics card for your gaming console. One its makers call a "world's first" in its ability to boost a game's content in real time, upscaling each pixel to 4K resolution with virtually no lag as you play.

If I had a Monopoly dollar for every kid...and CEO...and politician...who could use a copy of Monopoly for Sore Losers, I'd be so rich I'd take out Uncle Pennybags as the new face of Monopoly.

Interestingly, Monopoly for Sore Losers isn't about rewarding losers for losing with winnings such as participation trophies, ice cream sundaes, and hefty inheritances they never did jack shit to earn. Instead, the game doles out coins and power to players for doing things like paying rent and taxes, and going to jail.

I definitely wanted a set of MechaniCoasters to appease my fidgety fingers and steampunk penchant, and my wife's naggy inclinations and aversion to anything ring-shaped and wet touching her tables. But then I saw these super cool kinetic sculpture coasters are DIY. Like, if you want to tinker with their 4 different mechanical movements, and you want to make your wife happy you're using coasters, you can't just buy a set from Derek Hugger, you have to build them yourself.

microMend Emergency Wound Closures give new meaning to the term "pinch one off." Marketed as a quick, safe, and way less expensive alternative to heading to the ER for stitches, microMend closures can seal lacerations of up to 1" in length each, or lined up to seal longer cuts and gashes. Teamwork, baby!

Know what MonkeyFeet mean? No more sticking that dumbbell in your sweaty knee crease to do some donkey kicks and fire hydrants. The ability to do ham curls and weighted leg extensions without fancy gym machines. With nary more than a dumbbell or two, in fact. Oh, and you think MonkeyFeet enabling you to attach and lift dumbbells with your feet means you can't lift heavy on leg day? Nope! Each MonkeyFoot can support a dumbbell of up to 160 pounds! Woo-hoo!

Let the excuses end, and the torture begin.

Not sure Matador Meggings are right for you, dudes? Not sure any leggings, even those designed especially for men and their anatomies, are masculine enough for a place on your legs and crotchal region? Well. Matador Meggings creator, Valentine Aseyo, has this question for you: "Show me a superhero that doesn't wear leggings. I'll wait."

Make me a pack mule, and I look like an ass. But make me a mammoth, and I become a King of the Pleistocene. Mammoth Grips are extra-strong carry handles that enable you to double, triple, maybe even octuple your load without compromising its stability or your control, and without ripping up your hands and fingers during transport.

It's balls to the wall, all hands on deck, powers aligned, hail Mary, Care Bears Stare time! MS18, get your flash out here! Let's show 2022 the light. 100,000 lumens of light! Powerful enough to sear away darkness and illuminate hope as it blazes through even the bleakest of times. ... Or, you know, up to 135 unobstructed meters ahead.

The MS18 100,000 Lumen Flashlight is great for hiking, camping, caving, exploring, power outages and other emergencies, and telling all your friends you own the brightest flashlight on the market.

The mysteries of the ocean meet the mysteries of the skies in the Mushlume UFO, an aquarium filled with bioluminescent dinoflagellates that's shaped like a UFO. And a mushroom. It's an "unidentified fun object." Certainly developed by people who have never been drunk or high when brainstorming product ideas.

Presenting the Alphabet: 16 Gifts that Start with I

I've compiled 16 gifts that start with "I," but don't worry. Only one of them starts with "i." And it's an iParody, not another expensive Apple device, or internet-based smart home product that's going to be a bitch to...