Presenting the Alphabet: 17 Gifts that Start with G 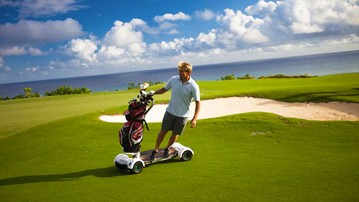 Note: All alphabet gifts are priced as they were at printing on November 8, 2022. Pricing, and availability, are subject to change.

These pillows aren't new to the market, but then again, neither are the all-consuming feelings of loneliness and despair that overtake us as we try to fall asleep at night. So maybe it's time to check out a tried-and-true solution to an age-old problem. The Girlfriend Pillow offers a warm, supple, polyester bosom to nestle into, and loving arm to hold you while you sleep.

Or, apparently, drive to work.

The chemical element Gallium does not exist in pure form in nature, but since it's so magical and badass looking all solid-to-liquid-at-the-touch-of-a-human-hand and all, of course man figured out a way to extract it from bauxite and zinc ores to use as his personal plaything. The shiny silver masses begin liquifying at 85.85 degrees F; when held on the palm and spoken to sweetly in iambic pentameter, a hunk of gallium will melt into an oozy yet glistening metallic blob in 5 to 7 minutes.

Unlike mercury and all items on the menu at Red Lobster, Gallium is non-toxic. You could probably even swallow it, as it has been incorporated into some pharmaceuticals and radiopharmaceuticals for medical applications, but I wouldn't recommend it unless there are a lot of dollars (or more preferably handjobs) attached to doing so.

Get a grip on your puff-puff-pastime - a real solid grip with this Glass Knuckles Smoking Pipe. Lightweight and made especially for a 5-fingered grip, the pipe gives smokers two options for their inhalation pleasure: a 0.59" bowl you can use either to pack loose leaf, or to hold a joint or cigarette.

Hold your bottle by the neck and your GrabOpener by the finger hole as you slip the aluminum hook over the lip of the cap. Press down, flip up, and sip's on, baby! The GrabOpener even disengages bottle caps without bending them, in case you're the cap collectin' type.

Note: the GrabOpener used to be called the Gropener. Any guesses why they changed the name?

I'm sure serious, elitist golfers have long been wondering when their posh country clubs were going to figure out a way to incorporate skateboarding into their rolling 18 holes of pristine greens. Well, lads, this is your lucky day: the GolfBoard has arrived.

GolfBoard promotes itself as a means of eliminating the "sedentary activity of sitting in a cart." This rideable greens surfer will also increase the speed of play and, according to its makers, actually reduce wear on turf.

The Gator Grip chomps up and spits out all the other sockets in your set. This universal socket houses 54 hardened steel spring pins that expand and contract instantly to fit a broad range of nuts, bolts, and other hardware. The Gator Grip adjusts to any standard nut or bolt head between 1/4" and 3/4", and metric issues between 7mm and 19mm.

You can also use the Renaissance Man of sockets to grip screw eyes, hooks, and lag screws.

A message from American Scientific's Gauss rifle, a chain reaction magnetic accelerator, or desktop cannon, styled after a NASA rocket: the cubicle warfare don't stop just 'cause you're workin' from home!

American Scientific made this Gauss rifle rocket to serve as a nifty physics lesson on chain reaction and magnetic acceleration. (And no, it didn't have to be a rocket, but firing steel pellets out if one's nose like they're, uh, spaceballs is so much more fun.) The rocket cannon is divvied into 4 stages, and comes with 4 wood mini-barrels and 9 pellet projectiles. Embedded between each state of the rocket are neodymium magnets.

Grampa invented his Weeder in 1913 to protect his back and knees during all the crappy yardwork Gramma made him do. Over a hundred years later, Grampa's Weeder is still around, and still helping men (and women) old and young alike pull weeds from their roots without bending over or kneeling down.

There have been some changes to the gardening tool along the way, including the total stoppage of its manufacture in 1941, when all available metal was put towards WWII. The most recent change occurred in 2019, when Grampa's Weeder the company decided to add a steel head for stronger removal capabilities to Grampa's Weeder the tool. Its 44" handle is bamboo.

Right-brainers, step right up. Left-brainers, Grids & Guides hasn't left you out either. The Notebook for Visual Thinkers from Princeton Architectural Press contains 144 pages of "varied and unusual graph paper" intended to better connect and engage you with your writing, sketches, and calculations.

The Gel Blaster is a toy blaster that shoots eco-friendly, water-filled gel balls called "Gellets." They're safe for shooters, targets, and the environment, plus fire from the blaster up to 100 feet at a rate of 150 feet per second. They're also available in electric blue and Gatorade orange so you can designate and clearly delineate battle squads. But Gellets' shining - or rather, splattering - feature is that they burst upon impact. Gel Blaster makers say it doesn't hurt, or stain, or make a mess. But it does make a nice thwap! and a squirt! wherever it hits.

Gel Blasters are battery-operated, and rechargeable. Each pack comes with 2 gravity fed hoppers that hold 700 Gellets apiece, a red dot sight, a mini flashlight for night play, accessory rails, safety goggles, and a pack of 3,000 Gellets.

And also neck fatigue, shaky hands, wrong-sized pedestal heights and prop angles, and the absence of brainwave-controlled robotic octopus arms that attach to your torso. Bet that last one's in the works though.

Another portable home gym that incorporates resistance bands for muscle building, the Gorilla Bow is an adjustable-weight system for any fitness level that promises to reward any sweat-seeking archer daring enough to pick it up with a full body workout. Cardio too.

The Gorilla Bow consists of a bag of 4 resistance bands that swap out to attach as the string between the two ends of an aircraft aluminum bow. Band resistance adjusts between 5 and 110 pounds so users of all levels can take on the weight they need to work through arm, ab, leg, and glute exercises, many similar to those they've seen before. Squats, bench press, curls, rows. The Gorilla Bow program also incorporates cardio moves for a full HIIT (high intensity interval training) workout.

Since the Galton Board knows you've been jonesing to see all the old, dead mathematicians in one place, within its tilting translucent walls and rolling metal balls you'll be able to witness: the Gaussian curve of the normal distribution; the de Moivre-Laplace theorem; the Bernoulli distribution; Pascal's Triangle; and Fibonacci numbers. Because the Galton Board is a desktop toy depicting Math! In! Motion!

Here's hoping Wingman of the Road's Goose doesn't bite it, leaving you despondent and questioning your need, your need for speed, at the peak of your story arc. More than a simple motorcycle tent, Goose is all-in-one camping system designed to pack down behind you as you ride, and then set up integrated with your bike, turning it into the tent's wingman, when you decide it's time to crash.

Er, not that kind of crash.

Wingman of the Road says Goose takes just a few minutes to set up, and pitches on any type of terrain. The tent is made of 420-gram ripstop canvas and heavy duty PVC flooring, waterproof and built with zippable fly screen layers on all 4 access points for cross-ventilation. It stands on aluminum poles and pegs.