Presenting the Alphabet: 16 Gifts that Start with H 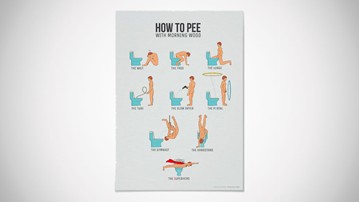 Note: All alphabet gifts are priced as they were at printing on November 9, 2022. Pricing, and availability, are subject to change.

Know what your TV needs? A suction cup. Not sold? How about a suction cup housing an on-screen LED red dot sight attachment for gaming guns? The HipShotDot attaches via USB to video game consoles (or an external USB power supply), and then aligns with FPS in-game sights to improve players' aim, firing speed, and hit accuracy.

Compatible with all gaming consoles and PCs, HipShotDot literally enables players to shoot from the hip with precision. It also frees up slots for other in-game attachments/perks, increasing the number of possible maneuvers and kill combos. Prime HipShotDot battlegrounds include Call of Duty, Halo, Battlefield, and Gears of War, but the accessory will function with any FPS game.

"Are you tired of being a victim of hail and living in fear of hail damage?" That's, no joke, Hail Protector's opening line. I think they stole their copy from a domestic violence Website. Let's see what else: "...pounding down"; "...rain of terror"; "...permanent marks"; "...don't drive a beater". Yep, definitely plagiarized. Come on, guys, there's no need to turn to a .org to help with product marketing, just look at the Hail Protector. That thing sells itself.

Powered either by AA batteries, a cigarette lighter, or AC outlet, the Hail Protector sheet drapes over cars, trucks, and SUVs and, via remote control, inflates to a weather-combatting cloud cushion in minutes. It's rated to reduce or eliminate entirely vehicular damage caused by hail up to the size of softballs. In addition, the cover has UV- and water-resistant properties, as well as maintains breathability to prevent moisture and heat buildup.

Even though J-Me's Horizontal Shoe Rack doesn't save much more space or prove to be all that different in practice than a normal shelving unit for shoes, I find its effect exponentially cooler. On its own, the simple piece of bent stainless steel looks modern and minimal. When housing shoes, it kind of makes the row of footwear look like it's floating. And floating footwear is always a crowd pleaser.

HoopLight brings the arcade to the driveway with its sensor-activated LED strip that loops around any basketball hoop, illuminating the rim in up to 100 different patterns when you score. Pop-A-Shot, meet playground.

The HyperWhistle takes its World's Loudest Whistle title not from Guinness, but from a mustachioed dude with a sound meter doing a review on YouTube. In the video, he hits a "personal best" 143 decibels with the HyperWhistle, and while I don't know if there are louder lung-powered noisemakers out there, I do know that 143 decibels is louder than a police siren, a jet engine, and fireworks.

In addition to its peak output, the HyperWhistle says it has an audible range of over 2 miles. That's great news for people lost in the woods or broken down on a boat, but terrible news for those within a 2 mile radius of an 8-year-old kid whose uncle gave him a HyperWhistle for his birthday.

Really, no one made a vertical Hoverpen before now? Seems like creating objects that magically levitate (i.e., doing clever things with a magnetic field) went almost as viral as making fidget toys there for a year or so. And with the Hoverpen, Shanpo is sort of doing both. Their writing instrument / desktop toy is a vertically standing pen that can also wobble and bob, spin in place, and give a satisfying snap! with its fully magnetic cap.

"Viking chess set" is just a loose description of Hnefatafl, which is actually its own ancient and authentic game created in Northern Europe during Viking times. It peaked in popularity during the Dark Ages, and hasn't been played much since the early 18th century, but if 1980s fashion could make comeback in 2020, why not revisit the 680s Viking entertainment on game nights in 2022?

How To Tie Knots Coffee Mug

The How To Tie Knots Coffee Mug makes a fine addition to the cupboards of fishermen, those stuck inside for the winter, but dreaming of summer sailing adventures, and people like me, whose hands are extra fidgety today from too many trips to the pot of dark roast.

The 10-ounce mug is painted with instructions for tying 8 classic knots, which you can practice anytime using its cleat handle and the included length of rope.

The Hushme is like the Baby Muzzle for adults! Of course, they spin it that the (Bane-approved!) voice mask and muffler serves wearers and their privacy while taking phone calls in public, not that it protects all the people who don't know them from listening to loud-ass strangers have conversations with their mamas and friends Cornelius at the bus stop. At the coffee shop. At the leg press machine you've been waiting to use. At the table next to you at the steak house you've been saving for a month to take your wife to for her birthday.

Nah, Hushme's for the user. All the cats out there who don't want Nosy Nosersons listening in on their business deals, medical discussions, baby talk with their wives, and phone sex with their mistresses. The muffler, which has been making the tech trade show rounds in prototype form, looks loosely like a pair of headphones that snap together at center over your kisser. There you'll find Hushme's microphone for talking and "advanced insulation materials" for acoustic suppression outside the device. A pair of in-ear headphones extends from either side of the set for complete hands-free communication.

The covert HemiSERE Titanium Lapel Knife isn't just some piece of urban-spy EDC Gearward designed for us to geek out on (though it's a little that too). It's a contemporary take on a real issue, the OSS Lapel Knife, clandestine operatives received to use during WWII.

Gearward modernized the Lapel Knife to be more practical and effective for today's carrier. At just 3.375" long x 0.75" tall x 0.05" wide, there's not a lot of room to get a good grip on the blade, so ergonomics were key to ensuring "you don't cut the shit out of yourself using the thing." The resultant design is reflected in the HemiSERE's name: a hemispherical cutout in the grip. This grip locks the knife in your hand so there's little change your finger will slide onto the edge. The grip also projects the edge of the blade forward like a claw.

Nevermind, Hotdogger, that no one's life is going to be lacking without a device that "drills" a hole in uncut hot dog buns so you can slip the dogs in condom-style and avert a condiment spurt while you're eating. I'm not sure that's even a first world problem, or a first world problem amongst avid hot dog eaters. My bigger issue with your Hotdogger device, which also looks like some sort of 8-bit weapon out of the original Legend of Zelda, is that even if can prevent condiments from oozing out of the bun during eating, how are you going to get them in there without making a mess in the first place?

As cozy and swingin' as hammocks are, a true suspended Haven in the woods probably wouldn't try to treat you like a caterpillar, or a dead Egyptian, with walls that collapse in on you, and a base that sags under your weight. Cocoons and mummification have their place during life-changing events, but they're no guarantee of a good night's sleep during camping trips, or even naps in the backyard.

Haven calls itself "a hammock...only comfortable," and "a tent...but easy to set up and take down." The hanging sleeper's most standout feature is a flat, ergonomic platform at the bottom that allows you to lie flat inside it. And that's flat on your back, on your side, on your stomach, or, depending on how you interpret Haven's assertion that they've "combined the best of hammock camping and tent camping into one amazing lay," a few positions you never thought possible.

HiccAway makes one hicc of a claim: it will stop your hiccups immediately. Designed by Dr. Ali Seifi, Director of the Neuroscience Intensive Care Unit at the University of Texas, the HiccAway device is basically a redesigned and 3D printed straw. To use it, put the tube in a glass of water and try to drink. It will take a little longer to get that first bit of liquid into your mouth, but once it's there all you have to do is swallow (that's what he said) and, according to HiccAway, your hiccups will go away. One sip and lickety split. Gone just like that.

Back it up, Homer. Slowly, quietly into the bushes, eyes peeled for anyone who might have - ha! Gotcha! I see those beady eyes and that bulging belly trying to sneak away into a thicket of scouring pad. Get back out here and scrub the 3-day-old egg off these dishes!

This Homer in the Bushes Sponge Holder is a 3D print of artist JAJAUM3D's spectacular reimagining of a classic scene from The Simpsons, and the meme it later inspired. Here, Geek 3D by Sean takes on PLA-plastic printing duties, replicating a disappearing Homer awaiting his "bushy" sponge, and mounting him on a yellow base with a black raised drain.